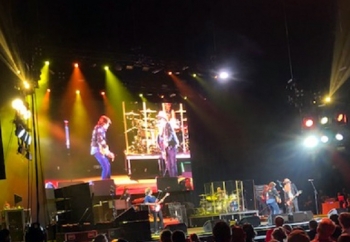 On June 24, 2018 WMGK presented a concert at Camden’s BB&T Pavilion with co liners ZZ Top and John Fogerty. With both acts being in the Rock ‘n’ Roll Hall of Fame, it was a toss-up as to who should go on first. After all, they both are “Heavy Hitters”.

On this evening it was ZZ Top that took the stage first. They had plenty of material to draw from. Their 1983 album ELIMINATOR alone sold a total of 25 million copies. It stands out among the eleven gold, seven platinum and three multi-platinum albums the group has earned.

Those of us in Philadelphia who were very much a part of those years when radio was playing the music that has become classic Rock, can take pride in the fact that we helped launch a number of legendary acts. But we were late to the table with ZZ Top.

The general feeling was that they were just an unoriginal boogie blues band. As a result, Philadelphia was one of the very last markets to embrace the “Little ol’ Band from Texas”. Our thoughts were shared by all the US record companies that passed on the trio and ZZ TOP was signed by the UK record company named London Records. Both the US companies and those of us in Philly radio were shown to be very wrong.

It wasn’t until Jimi Hendrix appeared on a late night TV show that ZZ Top started to get some respect from both radio and fans. In that interview Hendrix was asked if he liked any of the current guitarists on the scene. His response was that he liked what that guy in ZZ Top was doing. That guy was the right Reverend Billy Gibbons. Yes, the right Reverend. He has actually performed many marriages. His mention of the show surprised many who had never heard of the band and sent fans running to record stores to check them out.

Those of us who didn’t understand the attraction of ZZ Top missed their ability to get an audience to their feet and their often humorous lyrics. Those who saw them in the 80’s at the Spectrum were treated to a very lively show.

While the songs were performed pretty much flawlessly, the excitement that was present back then was somewhat missing. Yes, they did get some people up and dancing or at least tapping their toes, but the dancing on stage from the group was only present for a few seconds in one song.

The humor of Billy Gibbons was not in full force either. The best attempt was when he spoke of recently being on the same bill as Jeff Beck. The two decided to do a song together. Gibbons said that that they were both very much into Rock so it was only natural that they do a country song. With that said, Billy said we’d like to do that song for you now. ZZ Top then went into the song they did with Beck called “Sixteen Tons”, a number one hit by Tennessee Ernie Ford in 1955 on the pop charts. I heard the person next to me say out loud “I would like it if they didn’t do it”. The humor was lost on him.

Once Z Z TOP had done all their many hits, they gave way to John Fogerty. There was a real difference right away. The former leader of Creedence Clearwater Revival was much more animated despite his 73 years. The band was able to be much more varied in the music than the three piece power trio that preceded them. The band included a horn section (John said they were from USC), keyboards, bass, two guitars and drums.

One of the members of the unit was John’s son, Shane. Later Shane’s brother, Tyler, sang a couple of songs with his dad. Shane and Tyler also have their own band following in their father’s footsteps. Somewhat ironic since John and his brother Tom were in CCR together until John chose to leave the band.

There was also a surprise guest appearance. Billy Gibbons came out and explained that since doing this tour, John and Billy wrote a song together. The group then did the song called “The Holy Grail” that sounded much more like ZZ Top than CCR. Gibbons said he was having so much fun that he’d like to another song. They did.

In addition to that special guest, country star Brad Paisley made an appearance via video tape. The two have performed live before and wrote a song together. At that point Fogerty introduced some of his guests for the show that were seated in the front. They were veterans. John talked about being a vet himself and played the song that he and Paisley wrote called “Love and War”. The song called for better treatment of our vets and a touching video tape honoring vets ran in the background.

As part of the show’s variety, the band did a “Born on the Bayou” tribute. Despite growing up in Northern California, Fogerty loves southern music. In an interview he said that he learned all about the music from listening to the radio. He has always done a convincing job of playing the music of New Orleans and tonight was no exception. They even played “When the Saints go Marching in” complete with a New Orleans style march through the audience.

The fans who came to see the band do some old CCR songs were not let down. Despite a real nasty lawsuit between the record company and John, he still plays the old songs. In one of the most hard to believe lawsuits ever, John was accused of plagiarizing the material he wrote when he was in CCR. How does one copy from one’s self? The suit was settled and John has no problem doing the old material. Why not? They are, after all his songs.

John not only played many of the old hits, but played them with gusto. He even played “Centerfield” with a guitar shaped like a baseball bat. As a result everyone went home happy after seeing a great concert.

Tweet
Published in News & Events
More in this category: « 39th Annual Philly Bar Race for the Kids — May 20, 2018 Dan Ingram — A True Radio Legend Has Been Silenced »