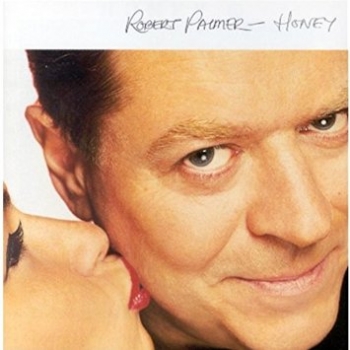 I first met the late Robert Palmer a few years prior to his music catching on big time. A representative from his record company brought him to WMMR to meet me. I had thought that his singing with Vinegar Joe showed some real potential and all of us at WMMR were delighted to play his first solo record called SNEAKING SALLY THROUGH THE ALLEY.

Even though the album only had limited success here in the US (reached 109 on the Billboard album charts), I was more than anxious to hear his new LP in 1975 and have a chat with him about it.

What a marvelous first impression he made. Robert was not only very articulate and charming, but he was very different from the majority of the rock stars that I had previously met. The thing that would strike you first was his appearance. Unlike other rock stars of that time period, Robert was very neatly dressed. Even on stage he wore and suit and tie. His hair was cut short and so well groomed that there wasn’t a single hair out of place.

Soon I learned that Robert and I had some things in common. For one thing, his father and mine both had naval careers. Both were officers in different countries. His father was a member the British Naval Intelligence.

Another common link we shared was that we both got an education in music by listening to the radio. Robert’s education on American music was a result of his family moving around the world where he could hear American Armed Services radio. That is where he was introduced to American Jazz, rock, Blues and soul music.

Despite the fact that the music of Robert Palmer didn’t take off with his 1975 release called PRESSURE DROP, I always thought he would make it big at eventually. His live show was as perfect as his hair. I enjoyed the show so much that when I was in Pittsburgh and saw that he was doing a concert in Wheeling, West Virginia, I jumped in the car and drove south to the show.

Much to my surprise there were a lot of good seats still available when I got to Wheeling. Apparently the word on what a great performer Robert Palmer was had not yet reached West Virginia. In fact, the place was practically empty.

The small crowd was still treated to a fantastic show. If Palmer was upset by the sparse turnout, you would never have guessed it. Most performers would have just gone through the motions and packed up. Not Robert Palmer, he not only played his heart out, he did an encore! He was a true professional.

Very soon after that concert in Wheeling I was delighted to see his career explode. “Every Kind of People” and “Bad Case of Loving You” led the way. Other hits followed and Robert returned to Philadelphia to a cheering, sold out crowds. His popularity continued through the 80’s and 90’s.

Then on September 27, 2003 the sad announcement came. The night before Robert Palmer had died of a heart attack in a Paris, France hotel. We had lost another special artist.

Tweet
Published in The Archives
More in this category: « Warren Zevon — The Excitable Boy Ric Lee and Ten Years After »