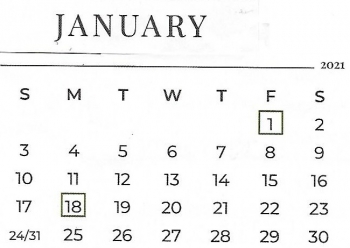 Of course, turning the page is only symbolic, but much is made (especially in the media) about looking back at the year that is ending. It certainly seemed like there was a lot less interest in looking back at 2020. It started out with high hopes like every year. The economy was booming, and people were getting jobs. The new year seemed full of even more promise; however, it wasn’t long before a new word entered our vocabulary. Covid-19 changed a bright future into one of doubt and fear.

For the music industry, it couldn’t have been worse. Music venues started to shut down. Tours and recording sessions were postponed. It was a real disaster for those who make a living in the music and related industries.

For those who know history, this wasn’t the first time that hard times almost muted music in this country. If you are not familiar with history, you can take heart that we have been down rocky roads before and came back even stronger.

It was almost hundred years ago that the “Great Depression” took over this country and the rest of the world. One of the reasons people were able to cope with such dire conditions was the music. The birth of the Blues and Jazz were created by people whose creative juices were sparked by the conditions of the time.

Some of the best music ever written was done during that time and during World War II. Songwriters were moved to write very touching songs about people being separated and dying during the war. They remain as some of the best love songs ever written.

In the 60’s and 70’s many artists used their talents to move their listeners to act. It was music that helped trigger the civil rights movement. The music makers were often in the foreground of changes that took place during that time frame. The war in Viet Nam led to a whole new thoughtful Rock music. The often maligned “Disco” craze was very much a period in time when people wanted to just get away from things like gas lines and inflation and the music provided an outlet.

While musicians didn’t find a vaccine or a cure for Covid-19, they have found ways to still bring music to us. Virtual concerts that were created and could be streamed into your home while the music scene was shut down, were not the best way to see live music, but it did help. They also used home studios to create demos or play their part in putting together a new song. Naturally, it doesn’t take the place of playing together and rehearsing, but the use of modern technology has at least enabled them to work on new material.

Now that we have turned the page on 2020, it is time for music makers of all kinds to find new ways of expressing the feelings that their fans can relate to and give them comfort that we will all be able to sing a happy song soon.