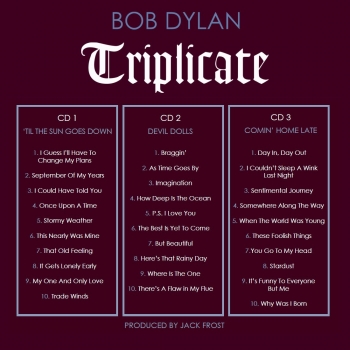 When The Bob Dylan CD SHADOWS IN THE NIGHT was released in 2015 a review was posted on this website. It got a lot of attention and positive feedback from those who visited this site. Since then two more Bob Dylan cover albums of nothing but American standards have been released and readers are wondering why there hasn’t been a review of either of them.

The fact is that there wasn’t any plans to write a review until there was a demand to do one. It must be said upfront that this reviewer is a huge Bob Dylan fan. He is viewed as one as one of the all-time greats in any music history. Is there any award that hasn’t been bestowed on Dylan at this point? Some may feel that these strong feelings about an artist may cloud one’s judgement. This is not the case.

As was written in the review of SHADOWS IN THE NIGHT, the CD was a novel move. Not that doing American standards was novel in itself, but the presentation was. Unlike attempts by notable Rockers like Rod Stewart’s huge selling American Classics series, this was not an attempt to remake Dylan into a crooner. It was hardly that despite the fact that Dylan received Grammies for his efforts on both the first CD and the follow up CD FALLEN ANGELS in 2016. Bob proved his point with the first effort and the follow up was not as surprising or entertaining as the first.

While it wasn’t necessary to continue in this vein, Dylan does what he wants to do. He always has. In speaking to members of his band they will tell you that Bob is constantly looking for change. He does the old songs, but often with so many changes in the arrangements that the both the band and the listening audience have trouble following. Despite having no money worries, Dylan is seemingly always on tour because he just flat out likes to play. However, he plays what he wants to play. For now he is enamored with the pop standard era and he will do these songs as long as he doesn’t tire of them. One can only hope he tires very soon. Of course, who is there to argue with him on this point? Certainly not his producer Jack Frost. For those who are not aware, Jack Frost is an alias that Dylan has taken to using for producing his own albums.

TRIPLICATE is not without merit. Several tracks like “I Could Have Told You”, “Somewhere Along the Way” and “Why was I born” work. What falls short are the big arrangement songs with horns, etc. One could easily shout out, “OK Bob, we get it the idea, now could you please more on?” We are so used to Dylan being the innovator that we long for more original songs from him. However Bob himself has admitted that he can’t write songs like the ones he wrote many years ago. Despite that, his originals during the past decade (while much different than his earlier work) remain some of his best.

There’s been much said about this being Dylan’s first triple album. Aside from the fact that each CD is around 32 minutes or less and could have easily been reduced to two CDs, the sameness of the songs and arrangements would have been better served if it was reduced to just one. Perhaps this explosion of three CDs was like the grand finale at a fireworks display. A burst of explosions and then the end. The best guess is that this was probably the last of these standards albums. Let’s hope so anyway.

What may be of more interest to Bob’s fans is an import CD that was released at almost the same time as TRIPLICATE. It is basically a bootleg released by Left Field Media. While there are some liner notes that came as an insert to the album, very little is actually revealed as to who was responsible for its releases. It certainly was not done by his record company, Columbia Records. Usually it is recommended that these kinds of CDs should never be purchased. Many have been burned by poor quality bootlegs in the past.

Such is not the case with BOB DYLAN UNDER THE COVERS (songs he didn’t write). All the live songs are of surprisingly good quality. You are treated to 75 minutes of great covers and traditional songs. The opening song “Pancho and Lefty” was recorded at Willie Nelson’s 60th birthday party in Austin, Texas in 1993. The song was written by Townes Van Zandt and features Willie & Bob singing together. From that same birthday bash Dylan also did a lesser known Stephen Foster song called “Hard Times”. That same song was part of the Dylan GOOD AS I HAVE BEEN TO YOU.

There are two songs that feature backup vocals from Joe Cocker and Paul Rodgers along with some guitar work from the great Richard Thompson. The standards are represented with “Soon” sung at his appearance in 1987 George Gershwin Celebration Concert.

The 1986 tour with Tom Petty is included with several songs. “I forgot more than you’ll ever know”, “Lonesome Town” (a tribute to Rick Nelson who died a month prior to the recording of this song), “Thank God” (Hank Williams) and a fun song “Uranium Rock” are the best of the lot.

Dylan will continue to do covers. That’s OK because you can expect that he will come up with something new before too long that will surprise and delight his fans. He always has. All of us will be looking forward to that day.