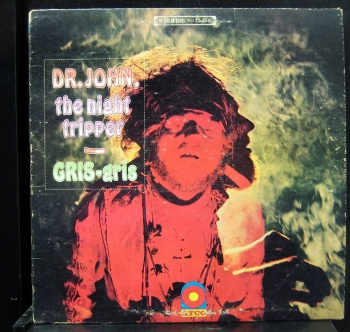 Just before dawn on June 6, 2019 one of music’s most talented and colorful musicians, Malcom John Rebennack, died of a heart attack. His friends from the Crescent City knew him as Mac. The rest of the world knew him as Dr. John.

Before it was fashionable to create an alter ego, Dr John became the night tripper. He wore the garb of the Creoles of New Orleans and spread his magic dust known as Gris-Gris. The character was loosely based on a real person named Dr John who was sort of Voodoo medicine man and healer.

Dr. John was one of the best interviews that I ever did. He was funny and developed his own hip way of talking. In addition, he had a wealth of stories to tell and didn’t mind relating any and all of them. I could have listened to him for hours. It seemed like there was no one that he didn’t play with or know personally.

The career of Malcom Rebennack started at a very early age. At 13 he was playing guitar with the legendary Professor Longhair. The professor’s attire and piano playing played a major role in developing the Dr. John character and his piano playing style.

At 15 he was still playing guitar in clubs. That got him into, as he would say, a heap of trouble more often than not. First because it was hard to hide the fact that he was underage to be playing in the New Orleans night clubs. Second because he was white playing with black musicians. That was very much against the Jim Crowe Laws still in effect in the city. That law prohibited whites and blacks being in a public place together.

Johnny Vincent, the owner of Ace Records, discovered the young player. This famous New Orleans independent record company had many hits in the 50’s by Huey “Piano” Smith, Frankie Ford and Jimmy Clanton (see that story here). Very recently I had a talk with Jimmy Clanton who expressed his admiration for Dr. John and he told me that most of the other musicians felt the same way about Mac. While talking to Dr. John you could see the respect and admiration that he also had for them.

The guitar playing days came to a very abrupt end in 1960. He brushed over it lightly, but, apparently he was hurt when he was stuck in the finger during a shout out at one of the clubs where he was performing. The injury made it very hard to play guitar. At first, he switched to playing the bass guitar, but within months he took up the piano as his main instrument.

Apparently, he learned so much from watching Professor Longhair, that it didn’t take him very long to master the piano. Soon after people forgot that he ever even played a guitar.

Almost surprisingly, Rebennack was very open to me about his bad drug habits back in his early days. It led to an arrest and jail time. As much as he loved New Orleans until the day he died, Malcom knew it was time to leave to get a fresh start once he was released from prison.

Off he went to Los Angeles to seek a career in music. It didn’t take very long for the studios to use his talents. Very soon after his arrival in Los Angeles, he became part of the studio musicians that became known as The Wrecking Crew. This group of the best studio players played on countless hits. The list is way too long to list.

Just being a back-up musician was great life. It was very steady work, but it wasn’t enough to satisfy the drive that Rebennack had to have his own band. That is when he hit upon the idea of creating the character Dr. John. He started playing gigs as Dr. John the Night tripper and was such a sensation that he scored a record contract in 1968.

The first album just called GRIS-GRIS was an overnight sensation. It was a strange mixture of trippy Rock, R & B and Creole music. The stage show resembled a Voodoo religious experience. Complete in wild costumes he would sprinkle his Gris-Gris all over the audience and they loved it.

Despite the fact that Dr. John stopped being the character he created around 1971, he would forever be known as the night tripper. He even his biggest, “Right Place Wrong Time” wouldn’t end the association with the name. Dr. John soon learned to embrace it.

The career of Dr. John led him to play on many hit records. There’s a long list of artists that wanted Dr. John to play on their record. He was asked to be part of The Band’s LAST WALTZ. He traveled as part of the Ringo Starr All Star Band and played at Jazz festivals around the world. Disney asked him to do a song for a movie. I’m sure I am leaving many important things out but there’s no way I can do justice to all that he did in his career.

The live shows continued right up until his death. Fittingly, his last performance was in his beloved hometown of New Orleans. It was also only fitting that his performance at The New Orleans Jazz Festival on May 17, 2019 got rave reviews.