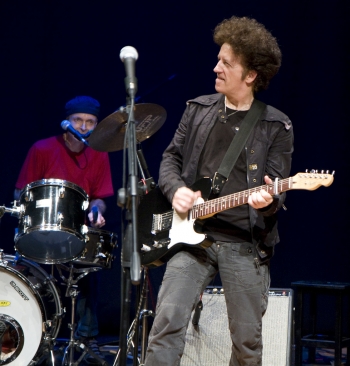 In 1980 I was working for Arista Records under the legendary Clive Davis. At one of our many staff meetings there was a real feeling of excitement and anticipation about a new artist that we signed. There was so much buzz about this guy Willie Nile that Arista actually won a bidding war with other labels to get him to sign with us.

What was not to like. Willie Nile (real name Robert Anthony Noonan) was causing a sensation in the clubs of New York City. On stage he looked like Bob Dylan (and talked like him as well), but performed more like Bruce Springsteen. Clive, who had worked with Dylan and signed Bruce when he was the head of Columbia Records, was totally convinced we had a major star in the making.

The first Willie Nile album was released in 1980. The critics loved it. Legendary writers like Lester Bang and Robert Palmer heaped praises on it and the helped fuel the “can’t miss” label on Willie. Palmer wrote “Every once in a while the times seems to produce an artist who is at once an iconoclast and near-perfect expression of contemporary currents. He is one of the best singer-songwriters to emerge from the New York scene in a long time.”

Once the record was out there, the radio stations were less excited with the self-titled album and it didn’t get the kind of exposure all of us at Arista felt he deserved. The end result was the sales of the record were disappointing to say the least.

So what happened? The Willie Nile story starts out like that of many rockers who made it to the top. He was born in Buffalo, NY. His parents were both very musical. His grandfather played with Bill "Bojangles" Robinson and Eddie Cantor. He even had uncles who played professionally. His older brothers turned him on to Rock ‘N’ Roll at a very early age that sparked a desire to play music. He started taking piano lessons at eight and played classical music until his teens. At that point he started his own rock songs.

Music remained a passion when he went to the University of Buffalo to major in Philosophy and he continued to write songs. Once he received his BA in 1971 he decided to go to where the action is - New York City. While hanging at the many clubs that the big city has to offer, he fine-tuned his song writing. It took a long time, but finally Willie Nile was being noticed. He began to play at the very same clubs that he used to frequent. He was soon drawing high praise and large crowds.

This led to the first album on Arista. Still convinced that Nile would be a superstar (after all even Bruce took a couple of albums to be noticed) a second album called GOLDEN DAWN was released in 1981. Once again, lots of praise, but no sales. At this point both record company and Willie became frustrated and Nile dropped out of sight until 1987.

He resurfaced in Oslo, Norway as an opening act for another great artist who never got his just due in this country, Eric Andersen. Norway had become Andersen’s second home and he was a superstar in his adopted country. That concert was videotaped and it gave Willie lots of exposure. A talent scout for Columbia Records saw the tape and signed him to the label. The momentum was killed when Columbia didn’t release his record for two years. Despite some great backing artists like Richard Thompson, The Hooters, Loudon Wainwright III, Roger McGuinn and The Roches the album was pretty much ignored. It sold so poorly that it was soon out print. One day while walking down the street I passed a record store that had a box of CDs for sale out on the sidewalk. I always look just in case there’s a forgotten gem in the plie. Sure enough, there was the Willie Nile CD. It was mine for a mere one American dollar.

While that Columbia album didn’t make him a star, many other artists who admired his music started playing with Nile in an attempt to finally launch his career. Among those who he worked with were Ringo Starr, Elvis Costello, Lucinda Williams, Ian Hunter, Levon Helm and Carole King.

In 1999 he once again tried his hand at doing another CD. BEAUTIFUL WRECK OF A WORLD was chosen as one of the best albums of 1999 by Billboard Magazine. It also reached the semi-finals as the Best Rock Album of the Year in the voting for the Independent Music Awards. Still nothing.

At this point almost anyone would have given up. His friends in the music business just would not let him. His exciting stage presence led to Nile being asked to perform with the E Street Band. How ironic! To perform with the backup band for the man that he once compared to when he first started. This led to the release of his 2006 album STREETS OF NEW YORK. Once again rave reviews from the critics. Once again it did no good and his career remained in the shadows.

As if that weren’t enough, Willie Nile went on to release four more very well received and award winning albums that still left him an unknown to most of the general public. Again his many friends kept after him to carry on. On April 1, 2016 another new album was released called WORLD WAR WILLIE.  Will it take a world war for everyone to take notice of his talent?

Photo Credit: Willie Nile performing in 2010 by Andre Sartorati is licensed under CC BY 2.0.