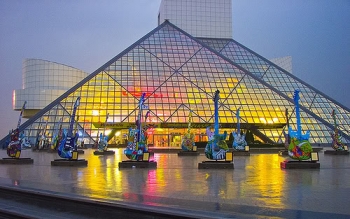 The Rock & Roll Hall of Fame building in Cleveland, Ohio

In the interest of full disclosure, Ten Years After were friends of mine long before they made it in the late 60’s. They themselves will tell you that I was the first to play their music in this country and played a large role in helping them become a success.

Having said that, let’s look at the facts. In a comparison to those who are going in as the class of 2019, Ten Years After are much better musicians, put on a better live show, have sold more records and if ticket sales count for anything, have sold more tickets as a headliner. In fact in the early 70’s they were among the biggest grossing bands on tour. They sold out the Spectrum here in Philadelphia several times. In one of those shows the opening act was Led Zeppelin.

They were also one of the very few bands that were selected to play in the Newport Jazz Festival and by many accounts stole the show with their performance at Woodstock. Still, they have not even been nominated. It is a shame. Below you can read my further feelings about the Hall of Fame that I wrote previously. Please feel free to leave your comments.

The class of 2017 for the Rock and Roll Hall of Fame has been announced and all is set for induction ceremony in New York on April 7, 2017. The induction will also be televised.

Every year the announcement of the new inductees brings with it hot debates as to who belongs and who doesn’t belong in the Hall of Fame. For the most part the Hall of Fame has done a pretty good job of selecting new members. My complaints pretty much come down to two things. The first is the timing of the selection. Too many times (like this year’s inductees Yes and The Electric Light Orchestra) the selections should have been made much sooner. The bigger complaint is that too many of those already in the Hall don’t deserve to be there simply because that are not true rock artists. This year’s pick of Joan Baez is a good example. There’s no doubt that Joan is a super star, but she is a folk singer and not a rock star. Can you think of any rock songs that she ever did? There’s already a singer/songwriter Hall of Fame that suits her talents much better.

Of course, it could be argued that there is no real definition of what constitutes Rock music. It is different for almost everyone, but picking artists who are way beyond the borders of Rock music doesn’t make sense. For me the music has to have a bit of a rough, raw edge. It doesn’t matter if it is rocking hard or an emotional ballad, the music must be played with feeling and excitement. No overproduction either. There’s should be some originality. It also helps that you can actually play the music on your instruments and not rely on machines or the sampling of others.

The tipping point was the practice of selecting those who do not belong was 2007 with the selecting of Hip hop/rap artist. Grandmaster Flash. The act has talent but could hardly be called Rock and Roll. Nor should Tupac Shakur who is going in this year. Same goes for Disco and pop artists. This was especially madding when many so many true Rock greats were and still are being ignored.

To a certain degree the selection committee is faced with a smaller pool to pick from. Looking to the future there are very few modern artists that deserve to be selected. There aren’t many that come to the top of my mind that might deserve to be selected sometime in the future. The current music trends are a lot more pop than rock. Once you get past Jack Black, The Black Keys and Wilco there is slim pickings. There’s hardly another Beatles, Stones, Kinks, etc out there today.

Rather than argue with the R & R Hall of Fame, I’d like to select my own Rockers that I think are worthy. This Hall of Fame will be for true rockers only. Many are already in the Hall in Cleveland, but many are not. Some of those on list are not rock performers, but have made major contributions to the music. Please feel free to pick your own or comment. That is what makes the whole thing fun.

You will note that some artists who are in the Hall of Fame in Cleveland are not listed. Disagree? Let me know your thoughts.