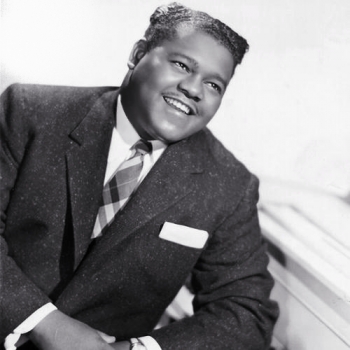 When Rock ‘n’ Roll was still in its musical crib, he was one of the pioneers that helped the genre spread from a passing fad to the most popular music in history. “Fats” Domino was one of the major factors in the transition. He was a force in his home town of New Orleans. Not an easy thing to do in a city where there were so many who made huge contributions.

His musical career started at a very early age. He was an accomplished piano player by age 10. At a time when the kind of music he played was lumped in with what was called “Race Music”, Domino recorded many gems with his unique style of “boogie” piano. In the 1949, long before Rock ‘n’ Roll even had a name, he recorded what many consider to be the genesis of a new beat.

It wasn’t until 1955 that the music of Antione Domino started to really take hold. Much of his success can be attributed to working with one of the all-time great unsung heroes, David Bartholomew. David signed Domino to Imperial Records. In addition he wrote or co-wrote, played a great sax and produced many of the big hits.

With the help of Bartholomew, “Fats” developed a style that was very New Orleans in nature, but also broad popular appeal. His biggest hit records were covered by many “pop” artist who had some real success with them, but they were no match for the real deal. The best examples were “I’m Walkin’” by Rick Nelson and “Ain’t That a Shame” by Pat Boone.

“Ain’t That a Shame” was the first of an avalanche of hits in the mid-fifties. It was quickly followed by “Blueberry Hill”, “I Want to Walk you Home”, “I’m Ready”, "My Blue Heaven" and “Walkin’ to New Orleans”. In fact, Domino sold more records than anyone in the fifties except Elvis Presley.

The thing that separated the music of “Fats’ from the many others who tried to capture more than the teen audience that made Rock ‘n’ Roll so popular was his low-key arrangements and mellow baritone voice. Many of the teens parents found his music to not only be more acceptable, but some were surprised that they actually liked them.

At the crest of the Domino string of hits, he was lured away from Imperial Records. It turned out to be his downfall. Without the influence of Bartholomew, his music started to get stale. One of the last songs that made the charts was written by one of his fans. Paul McCartney loved the music of “Fats’. He especially loved his piano work. Paul had “Fats” in mind when he wrote “Lady Madonna” and use the Domino style piano in the song. It was so perfect that “Fats” had to record it himself.

Even after his popularity started to wane, The Fats Domino Show was something to see. I was fortunate enough to see him perform at the long gone Valley Forge Music Fair. Despite being past his prime, the fat man went all out to entertain the crowd. Chuck Berry had his “Duck Walk” that brought the crowd to its feet and “Fats” had the piano bump. While he played the piano he would use his stomach to bump the piano around the stage. In his early days it was fairly easy for him to pull off the stunt. By the time he got to the Valley Forge Music Fair”, you could see it was much more of a struggle.

The legendary performer continued to perform until very recently when his health started to fail him. When hurricane “Katrina” hit his hometown in 2005 rumors surfaced that “Fats” drowned in his home. The rumor was started because the entire neighborhood where he lived was underwater. One person went so far as to spray paint “RIP FATS” on the side of his home. Fortunately that sign was premature. Fats and his family were spared although they lost everything. In a rare moment that most people never experience, “Fats” was showered with praise for being such a kind and gentle soul that would be greatly missed. It turned out to be a false alarm, but the concern for his well-being really moved Domino.

This time the sadness of his loss is real.  Given his reputation, one could expect that “Fats” has a special place in the beyond where he is still singing “My Blue Heaven”.