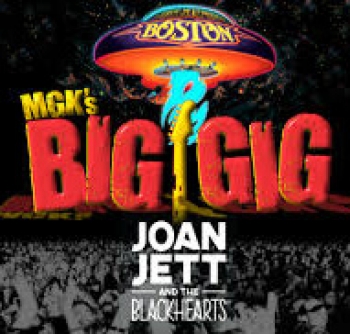 A little bit of rain couldn’t dampen the spirited crowd that assembled for WMGK’s 2017 Big Gig. They came for a great night of music and Kategory 5, Joan Jett and Boston did not disappoint the jammed BB & T Pavilion.

I warned those who arrived late on the air that they would be missing a great opening act in Kategory 5. They were the WMGK house band for the past year and did us proud. Kat Pigliacamp and the rest of the group did another stellar performance as they readied the audience for the headliners. While the entire group plays very well, I was especially impressed by the bass guitar work of Kyle Frederick. OK- they are a cover band, but one gets the impression that if given a chance they would do some outstanding original material. Their performance of the classics were flawless. Here’s a link to their website so you can see their videos and judge for yourself: http://kategory5band.com/.

After they finished I had an opportunity to talk to Kat backstage. She said they had a ball being WMGK’s house band and are only sorry that it had to end. The Delaware-based group plan on taking advantage of free recording studio time that they won as part of their prize for winning the band contest to record some original material. It should be very interesting to hear how they make out.

Back in the 80’s when I first met Joan Jett she told me as part of our conversation that her lifetime goal as a kid was to make enough money to buy her favorite baseball team — the Baltimore Orioles. Since I was born in Baltimore and have also been a lifelong Oriole fan that got my attention. I asked her why she was even an Orioles fan given that she was born in Philadelphia and now lives in New York. It turns out that she grew up in Baltimore and fell in love with the team.

At that time I was good friends with the publicity director for the Orioles. Through her I was able to get an Orioles hat that was worn and signed by third base legend Brooks Robinson. Joan was absolutely thrilled when I presented it to her the next time I saw her. While she still hasn’t made enough money to buy the team she does have a small part of the team for her crowded trophy case.

At the Big Gig it was time for her to provide the thrills to an appreciative audience. Joan hasn’t lost anything since the 80’s. She still goes all out and cranks out one catchy tune after another. The crowd especially loved “Bad Reputation”, “I Love Rock and Roll” and ‘Crimson and Clover”. She even went back to her very early days when she played with a group called The Runaways and did their best song “Cherry Bomb”. You could hear the crowd singing alone even through the pounding beat of the band.

During the entire set they used the giant screen in the background to good use. There were many old photos of The Blackhearts over the years and scenes that fit the music. If there were any skeptics in the audience who felt that Joan Jett and The Blackhearts don’t belong in the Rock ‘n’ Roll Hall of Fame, they should have been converted with the performance.

After the straight forward Rock style of Joan Jett was over the stage was cleared for an entirely different style of rock. Boston was a much more sophisticated and smooth set. While Tom Scholz is the only original member left in the group simply known as Boston, you would have never guested it. After an opening guitar solo by Tom the band went right into “Rock and Roll Band” and kept cracking out the hits from there. If you loved their record setting smash debut album called Boston, then you could close your eyes and pretend you were listening to that HUGE album at home. Despite having all new members, they were able to replicate all the tunes from their multi-platinum albums.

There’s no doubt who is the brains and leader of this talented band. It was Tom’s brains that brought him to Boston. Scholz was born and raised in Ohio. His first exposure to music was learning classical music on the piano. After graduating from high school where he was an outstanding student and basketball player, he went to college at MIT in Boston. His degree in mechanical engineering was put to good use as he built his own recording studio at home while working for Polaroid as a product design engineer.

It was in that home studio that most of the debut album was born and raised by Tom who played most of the instruments. His demos caught the attention of Epic Records, but they had little interest in having the band do a full album in Tom’s home studio. They finally gave in to Tom’s wishes and were never sorry about the results.

While Tom plays many instruments, his performance was limited to the guitar and organ. He showed he is more than well versed on both throughout the night. Certainly no Boston fan left disappointed.