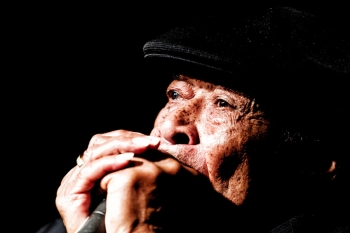 James Cotton, who was given the nickname of “Superharp” because of his virtuosity on the harmonica, died of Pneumonia on March 16, 2017 in his adopted home of Austin, Texas. He was 81 years old. With his passing we have lost one of the last direct links to the golden age of Chicago Blues.

Mr. Cotton was also a link to music further back. When he was a child he learned how to make sounds on the harmonica that sounded like the sounds he heard around him. Sometimes he sounded like a train whistle or a chicken. Other times he tried to sound like the field hollers he learn from his parents and the other sharecroppers working the land on a plantation in Mississippi. His father was also a preacher, so he tried to copy the harmonies of the gospel singers.

Unfortunately for James, his parents died when he was very young. Sometimes things work in mysterious ways. His uncle, who took him in at around 9 years old, thought that this young kid had some real talent. It just so happened that one of the uncle’s friends was one of the best harp players that ever lived so he took the young Cotton to meet him. Sonny Boy Williamson liked the young boy and taught him everything he knew. Sonny went so far as to take boy on tour and let him play with his band. It wasn’t very long after that James Cotton became known as one of the all- time greats on harmonica. Even though he played with great ones like B B King, Muddy Waters and Howling Wolf, until the day he died, James Cotton gave all the credit to his playing to his mentor Sonny Boy.

Like so many southern farmworkers, James went north looking for a better life. His first stop was the popular destination at the time, Memphis. It was there in 1950 that Sam Phillips first gave James a chance to record as back up to Howling Wolf. After a few years of backing up many Blues stars, James decided to start his own band and made a couple of records on Sun Records (see Archives article on Sun / Sam Phillips here).

Shortly thereafter, Howling Wolf left Sun Records and went north to Chicago and signed with Chess Records (see Archives article on Chess here). So did James Cotton. There he was part of the Chess stable that became the mainstay of urban blues. He played with just about everyone. They loved his unique style of cupping the mike and the harmonica to give it a real powerful sound. It was copied by any number of rock groups that sprung up during the mid to late 60’s playing their version of the Blues.

Ironically, The James Cotton Band became the opening act for many of the bands that he influenced. Among those were acts like Cream, Led Zeppelin, Santana, The Steve Miller Band, The Grateful Dead and Big Brother and the Holding Company with Janis Joplin. I was fortunate enough to see him play in his prime here in Philadelphia a couple of times. He was very much a showman doing all kinds of antics while performing.

His music didn’t really need any gimmicks. He recorded over two dozen albums. Some were nominated for a Grammy. Stars like Dr. John, Todd Rundgren, Steve Miler and David Sanborn played on his LPs. Muddy Waters and James Cotton reunited on the 1977 album HARD AGAIN. The album was produced by the guitarist Johnny Winter and it won a Grammy. He won another one in 1997 for DEEP IN THE BLUES. Sadly at around that time he had to give up singing when doctors found polyps on his vocal cords. That didn’t stop him from playing on records and his last album released in 2013 COTTON MOUTH MAN was also nominated for a Grammy.

In addition to his Grammy awards, James Cotton won several of the W C Handy International Blues Awards. In 2006 he was inducted into the Blues Hall of Fame.

Photos were taken by my friend Arnie Goodman in July of 2015 at a James Cotton concert. Arnie is also the editor of ELMORE MAGAZINE. The magazine is devoted to news of Blues and Rock bands. Check it out at http://www.elmoremagazine.com. 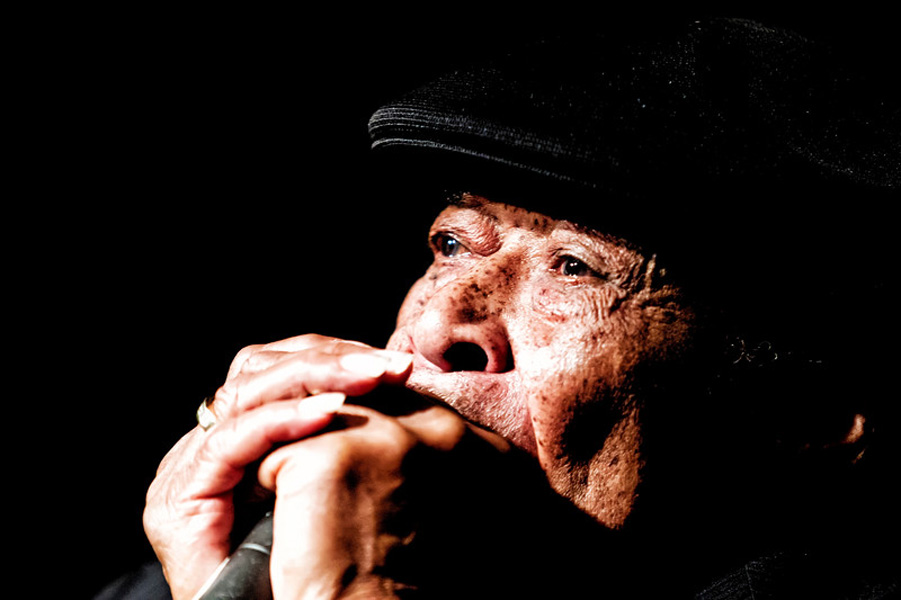 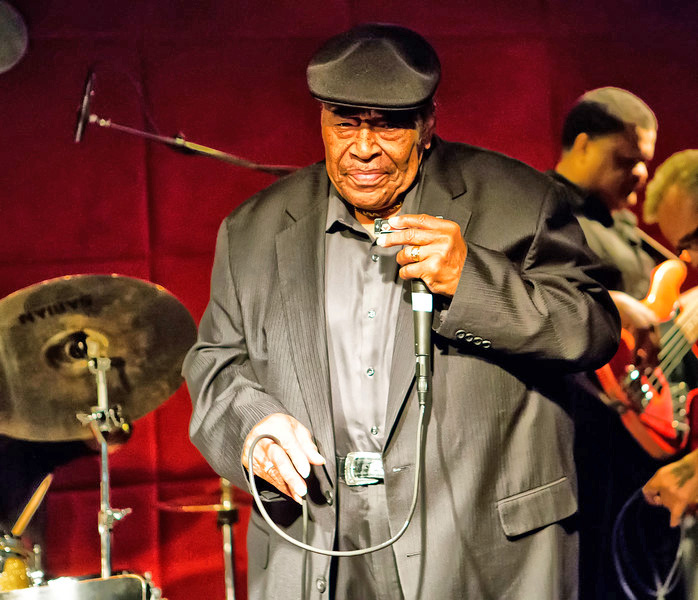 Tweet
Published in News & Events
More in this category: « Richie Ingui & The Soul Survivors Chuck Berry — The Granddaddy of Rock — Dies at 90 »