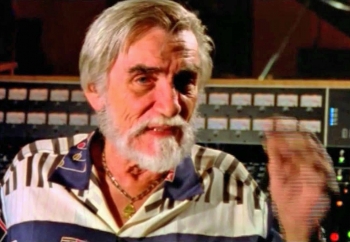 Then World War II broke out. The young scholar was drafted into the US Army at age 18 but didn’t go off the war. Instead the military was so impressed with his aptitude for Physics that he was selected to work on the top secret “Manhattan Project”. He, along with some of the top minds in the country, was handpicked to develop the atomic bomb.

The hush-hush project was done right in the labs of Columbia. Not even the university was aware of what they were working on. After the success of the project, the young Dowd planned to continue his studies in Physics at Columbia, but the college refused to give him credit for his work in the military. Apparently it was so top secret that they couldn’t even tell the school what he did.

At that point Tom decided not to finish college and his degree. As he put it, it would be a waste of time since he already knew more than the professors did. He wasn’t just bragging. His education in the project was far more advanced than anything Columbia had to offer at the time.

What may have been a loss to science turned out to be a major blessing to the music industry. Tom decided to learn how music was recorded in order to become a recording engineer. In 1946 making records was very primitive. Once he learned the basics, Dowd was hired to be the recording engineer for a fledgling new record company that became known as Atlantic Records.

It wasn’t long after learning the job that the young engineer starting making improvements in the recording methods. The biggest innovation that has been credited to him was multitrack recording which enabled instruments to be recorded separately.
It didn’t take Tom very long to go from being newly employed to becoming the chief engineer at Atlantic. Because of his vast musical ability he was instrumental in help develop many stars for Atlantic Records. It led to a long career where Dowd worked with many super stars in music. He was not only an engineer, but branched out into producing, composing and arranging.

He worked with artists in almost every kind of music. He first made a name in Jazz, but soon after R & B, Rock, Pop, and Blues to the mix. Here’s a list of some of the artists he worked with over his many years in music: Aretha Franklin, Eric Clapton (with solo efforts as well as Cream and Derek & The Dominoes), Wilson Pickett, John Coltrane, The Allman Brothers, Ray Charles, Chicago, Otis Redding, Gladys Knight, Charles Mingus, Dr. John, Neil Young, Bobby Darin, Paul Simon, Eddie Money, Paul Simon, Lynyrd Skynrd, Carole King, The Drifters, Buddy Guy, The James Gang, Meatloaf, Dave Brubeck, Cher, Stephen Stills, Graham Nash, Little Richard, The Marshall Tucker Band and countless others that I failed to mention.

Tom did more than engineer, produce, compose and arrange. He was a father figure and artists listened when he came up with ideas. When he was asked to record the historic Allman Brothers LIVE AT THE FILMORE album, Tom insisted that the band drop the idea of adding horns to the show. The band complied and went off to make one of the best live albums of all time.

When Derek and The Dominoes recorded “Layla”, it was Tom’s idea to add the piano at the end. That is Tom’s piano that really added so much to the song.

Even when his health started failing him, Tom moved down south and recorded until his death at age 77 in 2002. Unfortunately he didn’t live long enough to see his induction into the Rock and Roll Hall of Fame in 2012. It should have come a lot sooner.

There’s much more to his story. I highly recommend the full length film called “Tom Dowd & the Language of Music” for those who would like to know more about this extraordinary man.

Tweet
Published in The Archives
More in this category: « Before Becoming a Rock Star Featured 45: Bob Dylan — “One of Us Must Know (Sooner or Later)" »