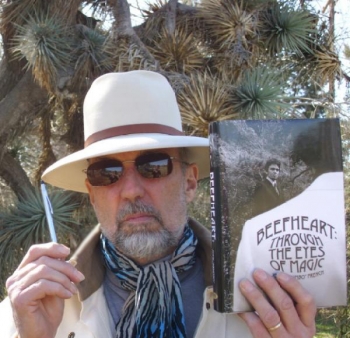 The general consensus in Rock circles has always been that Captain Beefheart was a musical genius. On this site there is a story already written about him. This is the story of the man behind the genius that made his work possible.

It was the great Captain Beefheart that gave John French the name of Drumbo when John joined the Magic Band. It marked a great turning point in the careers of both. While Beefheart had already been on record and was starting make a name in the music business, it wasn’t until French took over the drummer choirs for his band that things really started to change in the music.

As Captain Beefheart told me in one of our talks, there must be something about living in the desert that does something to the way a person relates to music. Both Beefheart and Frank Zappa lived in the desert. So did John French. At a very young age French joined a local band that even made a record, but his eyes and ears were always tuned into what Beefheart was doing with his music. That admiration led to John hanging out with the Captain. That in turn led to Beefheart inviting French to be the drummer for the Magic Band where he was christened Drumbo.

Soon other members of French’s old band joined with their new names. Mark Boston (Rocket Morton), Jeff Cotton (Antennae Jimmy Semens), Bill Harkleroad (Zoot Horn Rollo) all followed in his footsteps and one of the most talented bands ever assembled became the new Magic Band. That band became an amazingly tight group while practicing literally day and night for weeks on end. They rarely even took time out for eating. Lack of money for food also contributed to not getting enough to eat.

During this time Captain Beefheart drove them to their wit’s end with his concept of a radical avant-garde Rock that kept manifesting itself in his fertile mind. The major problem was that Beefheart could not read or write music. He needed someone to translate his ideas into music that the band could play.

The job of converting Beefheart’s, hums, grunts, or his banging on the piano or wailing on the horn into something that could not only be played, but replayed exactly the same every time over and over fell to John French. The drummer spent hours translating Beefheart’s complex ideas into music that his fellow band members could actually play. And play they did. So well, that virtually every cut on the album named the best album of the 60’s by Rolling Stone Magazine was done in one take. Frank Zappa, who produced that album called TROUT MASK REPLICA, couldn’t believe how tight the band was. He insisted that a couple of songs be redone simply to see if there was any difference. There wasn’t. This band simply just didn’t make mistakes.

One would think that John French would have been given more credit for the major role he played. Not only did he not get credit, he still humbly says that he was just the vehicle for the work of a genius. The fact remains that what he did made the radical music possible. His unreal drumming with such complex rhythms is nothing short of sensational. You can get more of an understanding of John’s contribution by viewing a DVD called CAPTAIN BEEFHEART UNDER REVIEW or reading John French’s book BEEFHEART THROUGH THE EYES OF MAGIC.

You would think that such a great drummer would be in great demand. However, he wasn’t interested in just playing just any kind of music. He wanted to continue to explore new adventures in rock. Once The Magic Band broke up, French went on to some other projects.

The most interesting (if not commercial) was the somewhat bizarre combination of John French, Fred Frith (who was the guitarist for a band called Henry Cow that was very much influenced by The Magic Band), Henry Kaiser (a San Francisco guitarist known for his experimental work), and Richard Thompson (a great guitarist and songwriter from Fairport Convention).

The group’s name was hardly original. It was French, Frith, Kaiser & Thompson. What was original was the music on their first album released in 1987 called LIVE, LOVE, LARF & LOAF. The LP sounded like a sampler album that record companies often give to radio to promote the latest releases from their roster. What a mixture of Richard Thompson folk rock songs, Beefheart sounding songs and even a cover of the Beach Boys “Surfin’ USA” of all things! Still it is pretty much interesting throughout. The album was not a commercial success nor was their follow up one and the group gave it up.

John French’s most recent efforts were a reunion effort of sorts with The Magic Band and a solo career with him singing. It will be his spectacular and creative drumming that will remain as his best work.

Tweet
Published in The Archives
More in this category: « Featured 45: The Knack's My Sharona Al Stewart: The Forgotten Star »