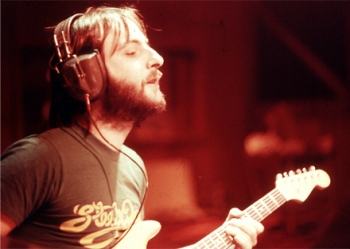 I was prompted to add Elliott Randall as the 7th entry in my series on rock's unsung heroes by a comment that was made by Rocky on this website. He asked me a question. By the way, the best way to ask a question on my website is by sending an e-mail. Just click onto the contact button.

Anyway, Rocky wanted to know if I was aware of any recent work from Johnny Madara. For those who don’t know, John is a songwriter and producer that was born and raised in Philadelphia. He first achieved fame by co-writing one of the biggest hits of all time that was recorded by Philadelphia’s own Danny & The Juniors called “At the Hop”. It was a number one hit record for 7 straight weeks in 1957.

Madara went on to write more hit songs and produced many hit records for a number of major labels. Among his major finds was Hall & Oates. He produced some their early records. He and his partner David White (who was an original member of Danny & The Juniors) became a song writing/producing/publishing team by forming their own company called Double Diamond. The name came from the first letter in their last names. If you put the M on top of the W, it forms a double diamond. The partners were very successful and in October of 2013 were given the honor of being placed on the Philadelphia Walk of Fame.

It was in the early stages of Double Diamond that John and I had conversations about me producing a group from New York called The Druids of Stonehenge. I met them back stage when they played at the old Electric factory and we hit it off. So much so that they asked me to produce their second album. I approached John with the idea of giving them publishing for the Druids songs if they helped fund the project. Before we could get to the point of signing contracts, The Druids let me know that their lead guitar player was leaving the band.

Elliott left his native New York City to follow some friends, Donald Fagan and Walter Becker who moved to LA to become studio musicians. The trio did demos on the side in hopes of doing their own album. That is exactly what happened in 1972 when they formed Steely Dan and put out their debut album called CAN’T BUY A THRILL.

At the time of the release of Steely Dan”s initial LP I was programming the music for radio station WIBG. In my book CONFESSIONS OF A TEENAGE DISC JOCKEY, I tell the whole story of how I became the first DJ in the country to play Steely Dan on the radio.

The long and short of it is that I picked Steely Dan to be superstars and that is exactly what happened. The funny part of it was when I first heard the record and was convinced I was listening to a major hit album, I had no idea that Elliot Randall was the lead guitar player. I just knew that whoever did the lead was one of the major reasons that I thought the group was going to make it big.

Elliott’s guitar work on “Reelin’ in the Years” is considered to be one of the best guitar efforts of all time. Jimmy Page called it his favorite ever. The readers of GUITAR MAGAZINE voted it number 40 on the list of all time guitar solos. Q4 went a step further and picked it as the number 8.

Oddly enough, Elliott didn’t want to be tied down as a member of Steely Dan. He continued to work with the band and played on several of their albums, but even when he was asked he to officially join the band be said thanks, but no thanks. Instead he has made a good living not only playing with a wide assortment of artists, but has written the music and produced many TV commercials and jingles. Among those are Coke, Pepsi, Miller Beer, Bud, Cadillac, Ford, McDonalds, Burger King, Nabisco, Wendy’s, Citi Bank, General Mills, Proctor & Gamble, MTV, ESPN, CBS, ABC and BBC TV.

If that weren’t enough, Elliott has also worked as a music consultant to major music manufactures like AKAI, Roland, Korg and Yahama. In addition he gives lectures.

With all that going on you would think that he has given up on doing his own music. Thanks to the wonder of the internet’s social media, I was able to catch up to Elliott. He tells me that he is still working on music projects and has CDs available on his website: http://elliott-randall.com. Among those included is his first solo album after leaving Steely Dan called RANDALL’S ISLAND. For those who don’t know New York, there is a Randall’s Island that is located in the river between Manhattan and Queens. The cover of the album shows a photo of Elliott standing on the water. Well, maybe he can’t stand on water, but he remains one of the best Rock guitarists ever and is certainly an unsung hero.

Tweet
Published in The Archives
More in this category: « Gene Autry: The Singing Cowboy and His Challenge The Rise of Independent Record Companies and Rock ‘n’ Roll »