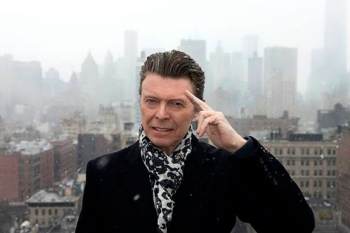 In large part because of the potential that Bowie showed in Philadelphia, RCA Records picked him up and reissued his earlier work. It was then that “Space Oddity” became a huge hit.

Once David dropped his Ziggy persona he came back to Philadelphia and recorded an album at the legendary Sigma Sound Studios. Jay mark, who I worked with at WDAS-FM, was the recording engineer for the sessions. In a conversation he had with Bowie he was asked by the star why no media people ever wanted to talk to him. Jay was really puzzled by the question. He related to David that his management refused any and all requests for interviews. It turned out that management felt that the mystery behind the image that they had created would be ruined if the public found out that David Bowie was exposed to be a rational, intelligent and nice person. More details are in my book “Confessions of a Teenage Disc Jockey”.

There was more than music talent in David Bowie. I often wondered that given his great acting in the movies and on Broadway why he didn’t do more acting. I suspect that he had too many others ideas in his eclectic musical mind.

After his initial success David Bowie shed all the labels. He did Hard Rock, Blue Eyed (or as he called it Plastic Soul) Dance music, punk and electronica during his over 40 year career. That recording career ended with the release of his last album BLACKSTAR which was released on his last birthday. The producer of the album, longtime friend Tony Visconti, said that David knew it was going to be his last album and wanted it to be a thank you to all his fans. The lyrics of the songs would back this notion up fully. Visconti said that the way David died was the way he lived. He was artistic and creative to the very end.

Tweet
Published in News & Events
More in this category: « Chris Squire of Yes has died Bob Dylan at the Mann Music Center July 13, 2016 »