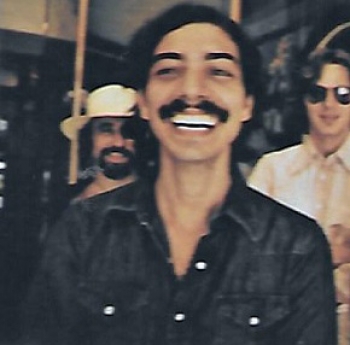 Another sad note on the music front. Richie Ingui, who founded the Philadelphia group The Soul Survivors with his brother Charlie and Kenny Jeremiah, died on Friday, January 13, 2017. How ironic that he died on the unlucky day of Friday the 13th. He and his brother Charlie deserved better luck in the music business. They had much more talent than given credit for over the years.

The brothers started out as The Dedications and released a number of tracks between 1962 and 1964 before changing their name to the Soul Survivors. Legend has it that the name came from the fact that the group had a bad accident on the New Jersey Pike on their way to a gig. After seeing the damage, they were sitting around a table at dinner when someone commented “How did we survive?” The Soul part came from the fact that the young group was very much interested in Soul music. Soon after the name change they signed a deal with Crimson Records in 1965. That is where they first teamed up with the very young team of Gamble and Huff. Another legend from Philly, Joe Tarsia was the engineer. He went on to be the chief engineer and owner of the legendary Sigma Sound Studios in Philadelphia.

It was Kenny Gamble and Leon Huff who wrote and produced their first and biggest hit, “Expressway to Your Heart”. It remains one of the best songs of all time with clever lyrics, great sounds and excellent vocals. It launched not only the career of The Soul Survivors, but of Gamble & Huff and the Sound of Philadelphia. The Soul Survivors went on to have a few more hits, but were never able to match the success of “Expressway to Your Heart”. That led to a great deal of frustration in the group.

The last straw was the release of their 1974 album simply called SOUL SURVIVORS on Gamble & Huff’s TSOP label. Richie co-wrote several songs on the album including the single “City of Brotherly Love”. The single barely made the charts and the album was largely ignored by the public despite some excellent reviews. It seemed that the public didn’t want the brothers to grow up. All they wanted was more songs like their first hit. Despite being an excellent album, the sales were just not there. The group was so disappointed that they broke up.

When the group broke up, Richie became a house painter. The brothers were always real down to earth and not awed by their fame. In fact Richie didn’t want anything to do with anything remotely connected to show biz. That feeling lasted until 1987. Then once again he teamed up with his brother Charlie to reform The Soul Survivors. That is when I first met the brothers.

I was the MC for a concert that they did. The show brought the crowd to their feet. It showed that they were much more than a one hit wonder. After the show we talked for a bit. They couldn’t have been nicer people to talk to. We stayed in touch. In fact, we had several long talks about making another album to show the world how great the group really was. After several attempts to try to produce them, the very reluctant brothers decided that they were happy just making a few nostalgic appearances a year for some extra money. It was a real shame because they were much better than that.

Gamble-Huff Music released a special statement on the death of Richie Ingui:

Legendary Philadelphia International Records co-founders and R&B pioneers Kenneth Gamble & Leon Huff released the following joint statement today as they mourned the passing this weekend of Richie Ingui of The Soul Survivors, whose 1967 crossover classic, “Expressway to Your Heart,” launched The Sound of Philadelphia (TSOP) as the first of dozens of hits for Gamble & Huff as songwriters and producers. Richie and his brother Charlie continued to perform and record together as the Soul Survivors, and were preparing to mark the song’s 50th anniversary this year:

"We send our very sincere condolences to Charlie and Richie's families. Not only did they bring our Philly Sound and Gamble & Huff to the national spotlight first with the hit song "Expressway to Your Heart," but they were truly like Brothers to us. Richie was a true soul singer who sang from the heart. We will truly miss him, and the unique and mellow voice he brought to of this amazing group, the Soul Survivors."

In 2013, The Soul Survivors were honored by Philadelphia International Records with the annual Phillies Gamble & Huff Community Partnership Award at Citizens Bank Park.

The last time Charlie and Richie recorded together was with a very good Philly project known as in the pocket that was put together by The Hooters drummer David Uosikkinen. It was a collection of Philly area all-star musicians recreating their hits. These both recorded and played live together and put on an excellent live show.

The very last time the brothers played together was at the Marian Anderson Awards at the Kimmel Center. As always Charlie and Ritchie were sensational and brought the crowd to its feet with one last performance of “Expressway to Your Heart”.

My deepest sympathy to Charlie and the rest of Richie’s family.

Tweet
Published in News & Events
More in this category: « Greg Lake — The L has joined the E "Superharp" James Cotton — One of the Last Direct Links to the Golden Age of Chicago Blues — Has Died »