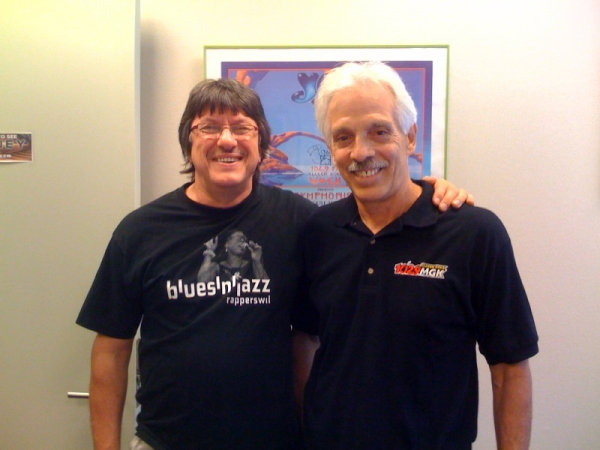 When I came back to the US I was able to convince radio WIFI to launch the first radio station in Philadelphia featuring albums cuts and not just hit single records.  It was only a matter of weeks after starting the format that the first Ten Years After album was released.  Since I was already familiar with the group, I played the album on the air from the moment I received it from the record company.  Since no other DJ in the country had any idea who this new English band was, I became the very first to play their music in the US.

While that first record was not a huge success, it did create enough interest to merit  the release of a spectacular live album called UNDEAD and a tour of the US for TYA.  Their first gig in Philadelphia was at the old Electric Factory at 22 and Arch. They were second on the bill to The Jeff Beck Group featuring Rod Stewart on vocals. As club manager Larry Magid relates in his book MY SOUL’S BEEN PSYCHEDELICIZED –ELECTRIC FCTORY, the manager of Jeff Beck was so upset with the reaction to the show that Ten Years After put on that first night that he tried to get them taken off the bill. The Jeff Beck Group was being shown up by this unknown band and he didn’t want any part of it. He even made a threat to boycott the show if he didn’t get his way.  Larry refused to change the billing telling him he was free to leave, but that the show went on as advertised.

The band was totally unaware of the conflict as we enjoyed talking to each other in their dressing room backstage. While talking to Ric Lee, George Emme the drummer of a local group called Thunder and Roses  that I was producing came to me with a problem.  The seat that he used to sit on behind the drum kit had broken and he didn’t have another one to use.  With no hesitation (or should I say without missing a beat), Ric said he had packed an extra one that he could have.

That act of kindness made me realize that this man was not like so many self -centered rock performers that I had met and we certainly could be friends.  As a result, I asked him if he was hungry enough to go out to get something to eat.  Ric quickly responded that he had heard so much about Philly cheese steaks in England that he wanted to try one.  I was somewhat startled that he had even heard of Philly Cheese steaks all the way over there in the UK, but I did agree to take him to one of the places in the city that were well known for them.  I will not mention the name of the eatery because after eating one of their steaks he flatly stated that he was very disappointed and didn’t understand why people liked these sandwiches.

Having had something to eat, we headed out to a party that was going on at the old Benjamin Franklin Motor Lodge off the Parkway. We hung out not only with the rest of the members of TYA, but with some of the other performers from the night-including Rod Stewart.

From there my relation grew with the band.  They invited me to tour with them.  I watched as their sensational live show enhanced their reputation.  I recall going with them to see their show at the Filmore East in New York City. Ric told me that the band was proud of the fact they were the headliners for the show.  Apparently it was only about year prior that appearance that they were the opening act for the same  band (The Nice) that was now their opening act.  For them, this was a sure sign that they were making progress.

The progress continued in leaps and bounds. They along with Led Zeppelin and Jethro Tull were the first rock bands to ever be invited to play at the Newport Jazz Festival.  I was certainly glad that I was able to witness them on that historic night  TYA  put on another brilliant performance. In my book I relate a lot more of what happened that night

Then just a couple of weeks later Ten Years After hit the peak as they stole the show at Woodstock.  They were the highlight performance in the movie that documented the legendary festival.  While I wasn’t at Woodstock, I was delighted to see them get the reaction they truly deserved.  It couldn’t happen to nicer people.

Ric is doing his best to keep things going for Ten Years After. It hasn’t been easy with the death of Alvin Lee, but they are still out there touring and thrilling audiences.   In the little free time that Ric has, he is writing a history of the band. I was anxiously awaiting its finish.

Ric and Ten Years After are playing The Sellersville Theater on August 21, 2019! T. Morgan will be the emcee. Limited tickets are still available, click here to be a part of this special evening!

Tweet
Published in The Archives
More in this category: « Robert Palmer Big Star »