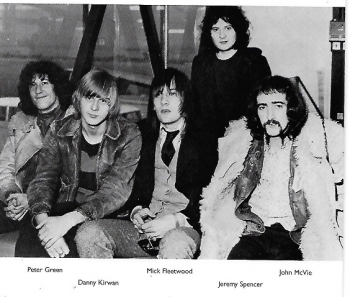 There are three very important names that were left off this list. Peter Green, John McVie and Mick Fleetwood were all part of the Bluesbreakers. John Mayall realized very early on that Peter Green was a major talent. So much so that Mayall paid for his backup band to do their first recording session. Peter was actually already out of the band because he felt Mayall was going away from the traditional Chicago blues into a more Jazzy direction. Green was so totally hung up on Chicago Blues that when he left The Bluesbreakers he had planned to go to Chicago to try and play some gigs with the real stars that he loved like Buddy Guy. When he found out that as a foreigner he would have to pay for a permit, he decided to form his own group and stay in England.

During that first recording session they recorded a song that didn’t have a title. Of course the band didn’t even have a name at that point. It was Peter who came up with the idea of Fleetwood Mac. Some believe that it was a way of getting John McVie to stay with the group since at this point he hadn’t committed to doing anything other than playing bass on these sessions. Mick Fleetwood objected to the name at first since he felt that not only was Peter the leader of the group, but was the star attraction. After all, he was not only the lead guitarist but lead singer as well. If the band had any chance of making it, it would be because of Peter. Green shrugged off the idea claiming that he would probably leave the band at some point and they then could carry on without him if they had their own name.

The name stuck despite the record company’s attempt to call the first album Peter Green’s Fleetwood Mac. The name of the group also became the name of the instrumental that didn’t have name. As almost a prediction of the future of the group, Christine Perfect played piano on the first album. She was not a member of the band because she was already in a band that was doing well in England called Chicken Shack. She would later became much better known as Mrs. John McVie or Christine McVie.

The end result was the first of a couple absolutely brilliant British Blues Rock playing. Peter Green’s guitar work was blistering! Even before the release of their first record, Fleetwood Mac was in high demand because of their ability to entrance British audiences with their brand of Blues. Once the first album came out they not packed houses, but astonishingly sold more records in England than The Beatles and The Stones combined!

Despite the success in England, the original Fleetwood Mac never had a real impact on the US music scene. It wasn’t for lack of trying. The group added Jeremy Spencer and Danny Kirwan and finally did a tour of the US. Peter’s real talent became even more evident when he began writing more original material. Up to that point they had done mostly Blues covers. “Oh Well” was a two part song that was released as a single with part one on one side and part two on the other. “Albatross” was an instrumental that was totally removed from Blues with a very haunting melody. His masterpiece was a minor chord blues song called “Black Magic Woman” that featured some extremely interesting chord changes that were never used in Blues. Ironically Santana had a real big hit with his cover of the song that did nothing for Fleetwood Mac on the US charts.

All these songs were big chart songs for the band in England, but were only marginally exposed in the US. Their release did garner enough attention to merit a tour of this country. By then there was a serious problem with Peter Green’s mental health. Peter’s behavior had always been a bit odd. Soon after the success of some of their records, Peter had insisted that the band give away all profits to various causes. He started using powerful drugs like LSD. That problem reached a peak when Fleetwood Mac started a tour of Germany. Some very rich “hippie” fans showed up at the airport when the group arrived and somehow
convinced Peter to go with them. That was followed by some real heavy LSD use. Peter was never the same after that.

It was at this point that Peter approached Fleetwood Mac’s manager and told him that he was leaving the group. The manager was able to convince him to stay on until their current tour was over because they all would be sued for breach of contract. Once the tour was over, Peter split.

There was an attempt at trying to go on without Peter on a US tour. It wasn’t working. Once again the manager was able to convince Peter to get on a plane and join the tour already in progress. That tour passed through Philadelphia when the band played at the old Electric Factory. It was apparent that Peter Green wasn’t the only one prone to an odd stage presence. Jeremy Spencer didn’t even look at the audience and spent a good deal of time hiding behind one of the huge speakers. It really wasn’t a surprise that during the tour he went out to look for books and never returned. It was later learned that Jeremy joined a group of people known as “The Children of God”. It wasn’t until years later that he resurfaced and played music again.

After the US tour it was a long time before Peter Green was able to do much musically either. He was diagnosed with Schizophrenia in and out of mental hospitals for a good part of the 70’s. When he wasn’t confined to a hospital, he worked at some very off jobs or was living with family and unable to function.

With the help of his brother Mike, Peter did a solo album in 1979. While the playing was very well done, it was not commercial and didn’t sell all that well. There were some other projects that he was part of and even did a tour with a band in 2009-2010 but very little since. There’s a BBC documentary of his life that is available and also a very good biography by Martin Clemins that can give those interested a lot more details. His work still gets praises from follow guitarist and is listed very high on most lists of the greatest guitarist of all time. Peter Green was inducted into the Rock ‘n’ Roll Hall of fame in 1998.

Do I have to tell you what happened to Fleetwood Mac without him? Mick Fleetwood will be the first to admit they really didn’t believe there was life for the band after Green departed. They were at a loss for a long time. But after several personnel changes, Mick Fleetwood and John McVie became part of one of the most successful acts of all time.

Tweet
Published in The Archives
More in this category: « Featured 45: Before They Make Me Run — The Rolling Stones The Blues and Classic Rock »