Bob Dylan's Shadows in the Night 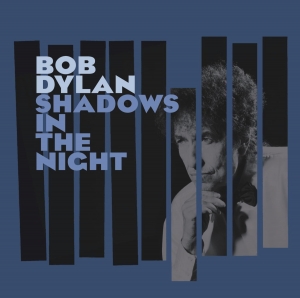 Sometime in November of 2014 word got out that there would be a new Bob Dylan album coming out shortly in early 2015.  A new album from Bob Dylan will always peak my interest. That interest was somewhat diminished when it was also revealed this new album would not be one of original material, but of all things old Frank Sinatra remakes.

An album of nothing but Frank Sinatra covers?  Really?  Didn’t Dylan already do a covers album with SELF PORTRAIT that most critics still call it his worse LP?  And then there was the Christmas album. That seemed somehow out of character, but then the man who changed rock music forever has always been full of surprises.

An amazing outpouring! A new record was set when 10,685 turkeys were donated to Cityteam Philadelphia in this year’s 13th Annual John DeBella Turkey Drop.

On November 25, 2014 John DeBella was stationed in Love Park where he broadcasted his morning show. He was joined by his crew of Jen, Rob, Dave and Turtle. The rest of WMGK air staff were collecting turkeys at various other locations.

I was located at the Classic Jaguar dealer in Cherry Hill, NJ. Even in the dark listeners came out to donate. It was a real pleasure meeting all of you, but I’d like to single out Steven Shivick of Cherry Hill, John Faford and Ed Marcinkevich of Mt. Laurel, NJ who were particularly generous with their donations.

You can click here to see pictures from all the locations on the WMGK website, but I have posted some of the pictures we took in Cherry Hill below. 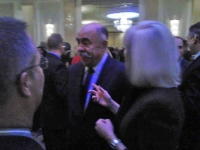 On November 21, 2014 the Broadcast Pioneers of Philadelphia had their annual Hall of Fame and person of the year awards dinner. It was held at the Hilton Hotel.

This year one of those inducted into the hall of fame was WMGK’s own morning man, John DeBella. Many of the WMGK staff were there to support and cheer him on. This is an enormous honor for John who has been the Philadelphia radio market for many successful years at WMMR and WYSP prior to joining the WMGK air staff. It was an honor that was more than due.

While many just know John DeBella as the man who gets them up every morning with a wide variety of humor, music and general craziness, John is much more than a voice on the radio. Those who know him well, know that he is very active in the Philadelphia community helping people from the veterans to the hungry. Though his untiring efforts, thousands of local people have been helped. This year’s turkey drop is just one example. Once again 1,000’s upon 1,000’s of turkeys were donated by DeBella’s listeners.

John was joined on stage at the dinner with the rest of this year’s deserving inductees and gave a rousing acceptance speech. He now joins an amazing array of very talented radio and TV people. 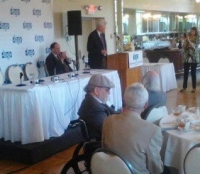 The Philadelphia Broadcast Pioneers "The Beatles & Their Influence" lunch was a huge success!  There wasn’t an empty seat in the Bala Country Club.  The crowd was treated to a host of stories about The Beatles as told by Bob Charger, Frank X Feller, Charlie Gracie, T. Morgan, Bill Wright, Michael Tearson and others. For those of you who missed this nostalgic trip back to the beginning of Beatle Mania... we have uploaded some photos and videos... check them out!

Denny Somach's Book — GET THE LED OUT! 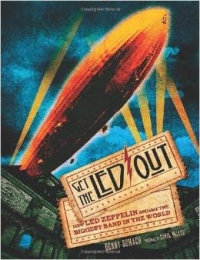 Longtime friend and fellow music junkie, Denny Somach, has a new book out that is an absolute must for any Led Zeppelin fan.  GET THE LED OUT is now available In both hardback and paperback form.

Denny, who not only is a former WYSP DJ, but a writer and producer of some of the best syndicated and network programming. In GET THE LED OUT Denny has put together the ultimate Led Zeppelin book.  Not only are there numerous beautiful  illustrations and a very complete day by day time line of the group, but lots of behind the scenes stories.

Johnny Winter: The Legacy Lives On 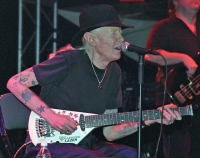 On July 16, 2014 one of the greatest guitarists that ever lived was silenced.  The 70 year old Johnny Winter was on tour when he was discovered dead in his hotel room in Zurich, Switzerland.  At the end of this tour Johnny was scheduled to re-join his brother Edgar for a tour of the US.  That tour was scheduled to touch down at the Keswick Theater in August.

Debbi Calton celebrated twenty years as the mid day air personality at WMGK on Wednesday July 16 2014.  See Debbi's reaction as staff members surprise her on the air.  I have worked with Debbi for all of those years and before that we worked together at WYSP back in the 80s.  The question that I get most often is "what is Debbi really like?"  The answer I give is what you hear is what you get.  There is no pretense with Debbi.  She has a passion for her listeners, the music and her job. She works hard at her craft and it shows.

So please enjoy these exclusive videos of Debbi's 20th anniversary celebration at WMGK and the AWESOME PARTY LIKE A ROCK STAR cake!!!

T. Morgan would like to thank everyone who recently participated in the May 18, 2014 Philadelphia Bar Association's 5K Run / Walk.  The race is held every year on the third Sunday in May and benefits the Support Center for Child Advocates.

This was the 35th Annual race and each year it draws a huge crowd.  T. has been the Grand Marshall for the race for the past five years.

Here are some photos of the race and T. Morgan with all the age group winners.

Published in News & Events
Be the first to comment!
Read more...
Page 8 of 8