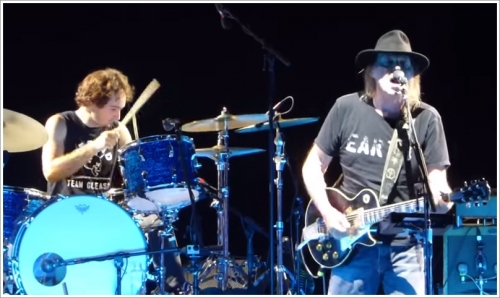 Once Neil reached for his black beauty guitar, the audience was keenly aware the electric was being turned up.  The crowd responded with loud roar of approval. The highlight was long “Down by the River” with all guitars dueling away to the delight of the cheering audience. Some of the younger members of the sold out crowd got up and joyfully danced through the entire lively set. Older members tapped their toes and bobbed their heads in the seats and wished they had the energy to join the younger ones in the aisles.

The evening was filled with a wide range of music from the outstanding musical career of one of rock’s most legendary performers.  Neil did mix in some of his more recent songs where he stressed his objection to GMO’s, etc ., but for the most part he thankfully didn’t dwell on his most recent less than stellar albums.

As one person put it that was sitting near me, is there anyone out there that is the new Neil Young or Bob Dylan or Paul McCartney when they are gone?  Sadly, the answer is no.  Let’s enjoy them while we can.

Tweet
Published in News & Events
More in this category: « The Doobie Brothers and The Steve Miller Band to headline WMGK’s Big Gig The "Big Gig" was a big hit! »