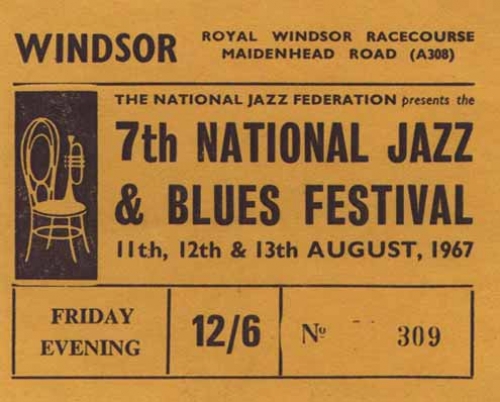 The music explosion wasn’t limited to California or even the US.  At the very same time in the UK things were really starting to heat up.  The highlight of the summer could very well have been the National Jazz, Pop, Ballads and Blues Festival (note the title of the festival was thankfully shorten).  Like Monterey, it was a three day event, but it was filled with British acts that were on the verge of exploding. The concerts were held at the Royal Windsor Racecourse.

On day one it was The Small Faces (that eventually became just the Faces with Rod Stewart) The Move (they would later branch off into The Electric Light Orchestra), Tomorrow (a group that featured guitarist Steve Howe), and Marmalade (who scored one major hit in the US).

On day two The Nice was a last minute replacement for Pink Floyd who had to cancel because Syd Barrett was unable to perform.  The Nice featured Keith Emerson on keyboard.  Prior to this performance they had just been a backup band for the singer P P Arnold, who never made a name for himself.  Paul Jones who was known better as a Disc Jockey despite playing with Manfred Mann and Eric Clapton, was second on the bill. The Crazy World of Arthur Brown featured Arthur being lower on stage with a crane.  He was supposed to sing his best known song “Fire” (that eventually became a huge hit) with his hat on fire.  Apparently at this show he had to remove the hat because the devise used to keep him safe didn’t work and he nearly burned all his hair.  Aynsley Dunbar had his own band at that time that performed some real solid blues rock.  He would later join Frank Zappa and The Mothers and eventually became the drummer in the original Journey lineup.  The best act of the night was Ten Years After. Almost two years to the day, they would steal the show as Woodstock.

Day three was one that most of the concert goers were really looking forward to because for most it was the first time they could see Cream.  Prior to the Windsor Festival the group only had one minor show and this was considered their first official concert.  They were followed by Jeff Beck and then John Mayall’s Blues Breakers.  John had discovered many great players (including Eric Clapton and Jack Bruce,) and the band at that time featured Mick Taylor on guitar and John McVie on bass.  A group called Chicken Shack followed.  The lead singer was Christine Perfect. She and John McVie not only joined Fleetwood Mac, but she married John and became Christine McVie.  Almost ironically, the very next group to perform was Fleetwood Mac.  It was the very first concert for the band. They had been doing some backup work for Eddie Floyd and a little studio work for producer Mike Vernon prior to this big debut performance.  Vernon would later produce Fleetwood Mac.

Also on the bill was Denny Laine (formally of The Moody Blues and later of Paul McCartney’s Wings), Al Stewart (who was later to score a couple of huge albums in the US) and Donavon.  They seemed almost out place.   Despite the name of the festival was somewhat misleading since it was very heavy on blues rock  It was indeed a real look into the future of rock music.

Below are two bill folds from the event!