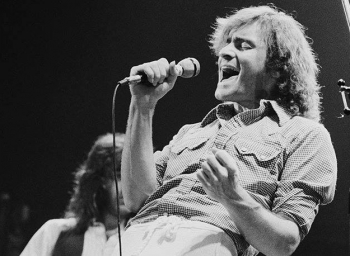 On September 27, 2018 the wife of Marty Balin announced that her husband had died. No cause was listed on her message that was posted on the Marty Balin website.

In many ways the founder of The Jefferson Airplane was not the typical rock star. While he was born in Cincinnati, he spent most of his life in San Francisco after his father moved the family there to take a job.

Very early on he showed exceptional talents for painting (good enough to earn him a scholarship), dancing and acting. He did both Shakespeare and musicals. In what would seem to a real paradox, Marty also joined a gang of toughs in his neighborhood. Since that was so out of character, perhaps he joined simply because he didn’t want to labeled as a sissy artist.

His father took him to see big bands and Marty loved it. He knew that music was exactly what he wanted to do with his life at a very early age. He couldn’t wait to grow up so that his body could catch up to his very active mind.

Once he was old enough, Marty started his music career. Challenge Records liked his potential and signed him to a record contract. One sticking point was his real name Martyn Buchwald. Both the record company and his manager insisted on a name change.

His manager Benny LeMarre also owned some theaters. One day he looked up on the marquee of one of them named the Bali Theater. Benny suggested the name Balin to Marty and the name stuck.

Nothing came from the early Challenge recordings. Then the so called “folk craze” started. Marty decided to join a vocal group known as The town Criers. While performing with the folk group he saw singer Trini Lopez perform. He was electrifying folk music and having great success with it. That was the catalyst for the birth of The Jefferson Airplane in 1965.

By 1966 The Jefferson Airplane was popular enough in the Bay Area that they drew the attention of RCA Records. They signed and recorded the group and the album THE JEFFERSON AIRPLANE TAKES OFF was released in 1966.

Unfortunately for the band, the album barely got off the ground. Then one of the singers left the band. She was replaced by another Bay Area singer named Gracie Slick who had been the lead singer for The Great Society. The revamped Airplane released their second LP in 1967 called SURREALTIC PILLOW. It was an instant classic and remains one of the best albums of all time.

While Marty’s song writing and vocals on moving songs like ‘today” and “Coming Back to me” were major reasons why the album sold so well, they overshadowed by the Grace Slick songs “White Rabbit” and “Somebody to Love”. Despite writing some good rock tunes on the album like “3/5 of a Mile in 10 Seconds Flat” and “Plastic Fantastic Lover” that also greatly enhanced the record, Marty became known as the romantic ballad writer in the group.

Having three singers in the band soon lead to conflict. There always seemed to be a certain amount of turbulence in the group. Of course drugs didn’t help. Marty did write more for the band including the hit “Volunteers”, but he decided to leave the band in 1971.

Perhaps in an effort to put the ballad label behind him, Balin briefly joined a funky driven band called Bodacious DF. It quickly became a failed project.

A year later Paul Kantner asked Marty to write a song for a new project that he was working on called The Jefferson Starship. He wrote “Caroline” that became an instant hit.

In 1975 he formally rejoined some of the members of the band he started and became a member of the off shoot group. Again his biggest contributions like “Miracles” and “With Your Love” were ballads. Once they became huge hits, he was pretty much locked in as the romantic in the group.

Once again the group in fighting caused both Gracie Slick and Marty to leave the band in 1978. After that he did some solo work including the big hit “Hearts”, but still keep coming back The Starship and other reunions.

From his appearances here in Philadelphia Marty Balin always seemed to be willing to please. He would talk to fans and was available for interviews.

His solo career came to a sudden end in March of 2016 while he was on tour. Suffering from chest pains, he was admitted to the hospital. Open heart surgery was followed by a lengthy stay in intensive care. Balin would later content that that hospital stay ruined his vocal chords and ended his career.

His wife Susan related that their marriage was an ideal romance. The kind that you would expect from a romantic ballad writer.

Tweet
Published in News & Events
More in this category: « Ed King the California Hippie who co-wrote “Sweet Home Alabama” Has Succumbed to Cancer Broadcast Pioneers of Philadelphia Presents a Tribute to WMMR »