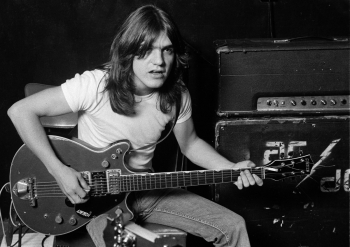 The real, but quiet, leader of AC/DC died on November 18, 2017. When AC/DC was first formed by the Scottish born, but Australian reared brothers Angus and Malcolm, many eye brows were immediately raised. There was talk of devil worship, promotion of an evil lifestyle or at the very least condonation of their bad behavior. Many radio stations wouldn’t even play their music.

The band, who got the idea for the name of the band when they saw the plate on the back of their sister’s sewing machine, had to deal with internal problems as well. Still, they not only overcame all adversity, but went on the sell millions of records in a forty year span.

Many agree that it was Malcolm who was the spark that ignited the band. Not only did he write or co-write most of their best songs, but had the right temperament to keep the band somewhat stable. Especially in their early years Malcolm took a back seat to the attempts by others to be outrageous. They wore gorilla suits, school boy clothing and even Zorro outfits.

Following after the shock rock era that produced the likes of Alice Cooper and Kiss, it seemed like the AC/DC sound was a bit too loud and raucous for the taste of many. They pressed on and finally their stage shows created a buzz that overcame negative press and radio programmers. The legion of followers just grew and grew.

The band exploded by the 80’s. Bon Scott was the new bad boy of Rock. Their album HIGHWAY TO HELL was a huge seller and radio stations had to give in to an audience that wanted to hear more of them. It seemed like the tide had finally turned.

Then in February of 1980 Scott died of asphyxiation after choking on his own vomit after an all-night drinking binge. Dire predictions that the band was finished was the norm.

Malcolm didn’t let that talk stop the forward progress of the group. Instead of giving up, the group moved on and hired English vocalist Brian Johnson to front the band. Instead of flickering out, the band brighten to new levels.

The 1980 BACK IN BLACK featured a Black album cover in honor of Scott's death. The songs, however, were among the very best written by the group. "Back In Black,", "You Shook Me All Night Long”, ''Rock and Roll Ain't Noise Pollution" and "Hells Bells." Led the way. The hard rock rhythms driven by Malcolm that fit perfectly with the guitar work of brother Angus, along with the powerful voice of Brian Johnson as well catchy tunes finally made AC/DC part of mainstream Rock. It wasn’t long before you could hear them on movie sound tracks, TV shows and even commercials.

The momentum carried the band through not only the 80’s, but the 90’s but things slowed down after the turn of the century. That hiatus only made their legend grow.

Then after more personal changes the group released their third album in the new century called ROCK OR BUST. It was the first without Malcolm, but even though he didn’t play on the record his influence was everywhere with his contribution to the songwriting. It was announced by Angus that the reason his brother hadn’t played on the record and would not be touring was he was suffering from dementia.

Malcolm had struggled to contribute to the band that he loved for as long as he could. He told Angus “To keep it going”. They tried. Even with the retirement of Brian Johnson who was suffering from hearing loss, they tried touring.  In 2016 they were able to use the lead singer for Guns ‘n Roses Axel Rose as their front man. That is unlikely to happen again. Sadly it would certainly seem that with his passing of Malcolm it is finally lights out for AC/DC.