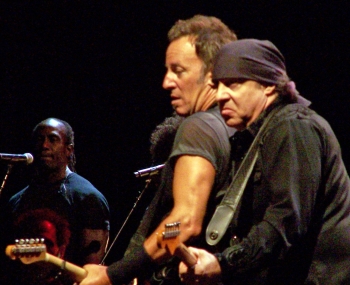 Like Bruce and so many other rockers, Steven’s life changed when he saw The Beatles on the Ed Sullivan Show. Before that he was just an average student with no real life goals. In fact, he was at one point thrown out of school, but did return to graduate. The Beatles and the rest of the British Invasion made him get serious about playing his guitar and music in general.

Bruce will be the first to tell you that Little Steven was a major factor in his music. The guitar line in “Born to Run” is just one example. Despite his many contributions, Van Zandt became the rhythm guitarist once Nils Lofgren joined the E Street Band. Steven was fine with that. He already had many other projects in mind.

Even before he joined the E Street Band he was doing some writing and producing. Southside Johnny’s closest thing to a big hit “I Don’t Want to go Home” was written by Steven. He also produced the band and did the horn arrangements with a horn section known as the Miami Horns. That led to Steven getting another nickname-Miami Steve.

Besides the producing credits on Springsteen’s THE RIVER and BORN TO RUN, Van Zandt’s producing duties extended to some of his heroes growing up. He produced two Gary “US” Bonds albums and Darlene Love.

In 1981 his success with Springsteen, Southside Johnny and Gary “US” Bonds led to him being offered a contract as a solo act. Thus The Disciples of Soul was born. While that led only to moderate success, Steven was making a name for himself. Because of that, other artists were willing to join him is his Sun City project. The focal point was the popular (many Rock acts played their venue) resort’s apartheid policy. Performers were not only asked to boycott playing Sun City. Steven took it a step further and in 1985 when he put together a protest album called SUN CITY. Among the performers who not only took part in playing on the album, but also pledged to not perform at Sun City were Springsteen, U2, Bob Dylan, Pete Townshend, Tom Petty, and Joey Ramone. This project led to Van Zandt being asked to perform at Nelson Mandela’s 70th birthday party.

While still performing with Bruce and fronting his own band, Steven took yet another turn in his career. Out of nowhere he decided to audition for a part in a home state of New Jersey based TV show. Despite having no acting experience he was given the role of Silvio Dante on the TV series called "The Sopranos." The character was based on a character Steven created in a short story that he wrote. That huge success led to another TV series called “Lilyhammer”.

As if he wasn’t busy enough, Steven created a syndicated weekly radio show in 2002. The show is called “Little Steven’s Underground Garage”. It can now be heard on over 200 radio stations around the country. Here in Philadelphia you can listen to the show every Sunday night at 10 PM on WMGK.

Because of the success of the show, Sirius Satellite Radio decided to devote an entire channel to Little Steven’s unique musical tastes. Beside a daily appearance from Van Zandt, there several very well informed on air hosts. Among them is Kid Leo who was largely responsible for one of the most successful Rock station in the country WMMS in Cleveland. He left there to be a record executive.

For those who not familiar with “Little Steven’s Underground garage”, it can be a bit of challenge to explain what you can expect to hear. The bedrock of the underground is what Little Steven loved when he was growing up. “Garage Rock” (see story in the archives) that excited rock music listeners in the early to mid 60’s is the main thrust.

The largest players are groups that were part of the first British Invasion-Beatles, Stones, Kinks, Who, Animals, etc. Don’t expect to hear much of anything from the latter careers of these acts. So called “Progressive Rock” and Southern Rock are not part of the format. You will, however, hear new material from artists who stay in the raw, rough edged genre that is garage Rock. One of the new releases is picked every week to be presented on the air as “The Coolest Song in the World” for that week.

You will also hear some great old blues and R & B artists like Sam & Dave, Gary “US” Bonds, Jimmy Reed, etc that get sprinkled in with some 50’s Rock and Doo Wop as well as Phil Spector girl groups like The Ronettes, The Crystals and The Shirelles . With several “B” side thrown in, it is a most unusual mix of music.

Right now Little Steven and his Disciples of Soul are out on tour. As of this writing the tour is headed to Europe. They just finished a US tour that had a very interesting twist. Van Zandt has long felt, like many others (see story 88 + ways music can change your life), that music is being short changed in our education system. So in 2007 Little Steven launched his Rock and Roll Forever Foundation.

This non-profit foundation was formed to create a curriculum that includes music. This is sorely needed with so many school cutting funding for teaching music in schools. A large part of that is the TeachRock initiative. The lessons and resources are provided to allow for teachers to help young students to connect the dots between popular music and all the other academic disciplines.

So the twist for this current tour is to offer free tickets to qualified teachers. All that is necessary to get the tickets is to arrive a little early and be provided examples of lesson plans that incorporate music with the other subjects. Teachers have overwhelmingly embraced the concept.

But wait! There’s more! In 2006 Little Steven formed his own record company called Wicked Cool Records. At first the label just released or re-released artists or songs from the underground garage favorites. They now are signing acts that fit the mold of a garage band.

Despite all of these activities that have brought him fame and fortune, Steven Van Zandt remains well grounded. Unlike many celebs, he has been married to only one woman since 1982. The only thing that some people might think is somewhat eccentric about him is his wearing of a bandana. The reason for it is actually very simple. When he was young he was hurt in an accident that left a scare on his head. While the injury healed he wore a scarf on his head. It soon became his signature and it has remained on his head throughout his career. And not a bad career for someone who almost didn’t graduate from high school.

Tweet
Published in The Archives
More in this category: « B B King Blues Club NYC — A Landmark Closing Rock Stars Who Were Athletes Growing Up »