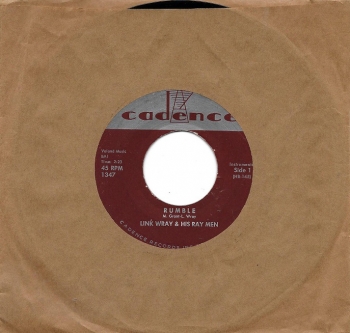 Despite only reaching number 16 on the record charts in 1958, the single “Rumble” is considered to be one of the most important records in Rock History. It is suspected the record would have done even better except that many radio stations refused to play it on the air. Not being played in major markets like New York and Boston really hurt sales. It is the only instrumental to ever be banned! How does an instrumental get banned? Well, it was thought that the title “Rumble” (the slang word for a gang fight) would insight a breakout of gang violence. A bit of a stretch I grant you, but this was 1958.

Back in the 70’s I had the good fortune to meet and interview Link Wray. The unique sound of the instrumental hit made the record one of my favorites of all time and I was anxious to hear how he created the sound. His story turned out to as unique as his sound.

There were a series of events that led to making the record a hit.

In the 1950’s Wray was in the US Army and contracted Tuberculosis while stationed in Korea during the war. He lost a lung and was in the hospital for a year. While he fully recovered, the doctors told him not to sing anymore because it would be too hard on his one lung. He still wanted to front a rock band so he decided he would just do instrumentals. Later in his life Link did return to singing (rather well), but by then it was too late for fans to accept that he was more than a great guitar player.

The great fuzzy sound that you hear in “Rumble” was done long before you could create the sound through devices like a fuzz tone pedal. The sound came as a result of an accident. While moving the amps for a gig, Link slipped and put a small hole in his guitar amp. He didn’t have the money to fix it and he thought a very small hole wouldn’t matter that much. How wrong he was. That small hole gave him a new and unheard of sound.

The sound was put to good use when Link played the song he called “Oddball” live. His live shows started getting attention from record companies. Cadence Records Company head Archie Byler liked Wray, but hated the song. However, his granddaughter LOVED it and begged him to sign Link and release the record. When Phil Everly (who was also on Cadence) heard the song, he said it sounded like a soundtrack to a gang fight. Hence “Rumble” was born. The hit was followed up by another instrumental called “Raw-Hide” that made it to the top 25, but the follow up singles never made the charts despite some pretty interesting guitar work.

That is where the Philadelphia connection comes in. From 1963 through 1967 he was on the Philly based record company called Swan Records. However he never had any hit singles with Swan either.

Then in 1971 Polydor Records decided to restart the career of Link Wray. They put out three unsuccessful albums in the 70’s. Link was on tour promoting one of these records when we talked. At the end of our conversation I showed him an album (shown below) that I brought from home so I could play some of his music as part of the interview. While it had some of his older material, it didn’t include “Rumble”. He was totally amazed because he had never even seen it before. Shaking his head, he said this is why he hated record companies. I’m sure he never saw a dime from the sales of that record.

It was things like that which most probably led to him stopping all recording for a long period of time. His very last US released album came in 1979 on RCA Records. It was a live album, not a studio one.

After that, Link spent most of his time in Europe where he could make a living playing live. That great live show can be seen on a 2003 DVD called “Link Wray-The Rumble Man”. Unfortunately, the DVD is hard to find. Too bad because it was the last glimpse of the guitar wizard. Shortly after its release, Link Wray died in 2005. 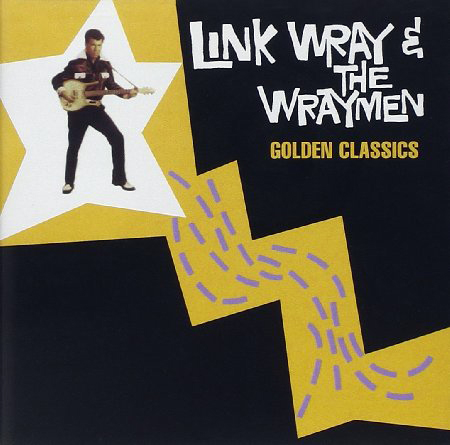 Tweet
Published in The Archives
More in this category: « Pheatured 45: Phillies Fever Featured 45: The Knack's My Sharona »