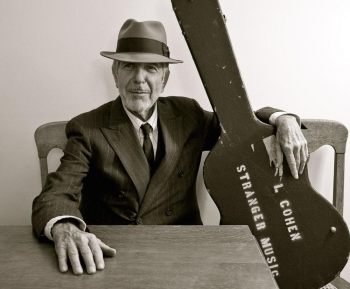 I still remember the day that the first Leonard Cohen album came across my desk in 1967. There was already talk about him being Canada’s answer to Bob Dylan. That certainly didn’t help. Being compared to Dylan was almost a daily ritual in the press. Most didn’t come close to living up to the hype.

The first cut on the album “Suzanne” soon put those thoughts in the background for me. While Cohen and Dylan both were hardly great singers and both were the best poets for a new generation, they was a stark difference between the two. A comparison was not only unnecessary, but kinda like apples and oranges. For me one thing that they did have in common was their voices certainly fit their music. No one could present their music better or with more feeling in their voices than the authors themselves.

Leonard Cohen was first and foremost a poet. He didn’t start out to be a singer and actually didn’t record his first album for Columbia until he was 33 years old. He had a life before that in Canada and to some degree in the US with his books of poetry. A great look into his early works is shown in a film called LADIES AND GENTLEMEN LEONARD COHEN. The hour long video gives you a good look into what Cohen was like in the early days. He presented an off center sense of humor (often laughing at himself) as well as a rather gloomy dark side.

Cohen’s poems are extremely well written. The songs he wrote are simply poems with some music in the background for affect. His ability for finding the right word at the right time is uncanny. His metaphors always hit the target.

During his later years he seemed to be even more prolific and excellent in concert. For a closer look at his work and personality the 3 DVD set called TRIUMVIRATE is recommended.

The DVD’s of his shows in more recent years are also highly recommended. Leonard never sounded or looked better and more relaxed than in his later years. Like so many talented artists, Cohen’s works were better understood and appreciated overseas than in the US. Both LIVE IN LONDON and SONGS FROM THE ROAD give you the full impact of his live shows and how admired he was abroad.

One US citizen who did admire Leonard Cohen a great deal was and old friend (ironically since the year of the first Cohen LP) is Michael Tearson. When I learned of the death of Leonard one of my first thoughts was to reach out to Michael to get his insights. No one could do a better job of doing a tribute to Leonard than the long time radio personality who is now heard on www.iradiophilly.com. To listen to his show on Leonard Cohen click on this link: http://www.iradiophilly.com/viewpodcastgallery.php?idPodcastGallery=48

Here is part of what Michael wrote in his reply:

One time in the 1980s I had the delight of a lengthy stroll across Center City with Leonard as he was going to a book signing, and I was showing the way. We chatted extensively, but I remember very little of the contact. What stays with me most was how courtly and accepting he was. There was a reserve, but a very kindly light shining from him. I had him sign a poetry book and a CD of New Skin for the Old Ceremony with the Renaissance lithograph censored from the US cover. I thought he'd appreciate that touch.

One other thing that Michael wanted me to pass on.

One thing you MUST see if you have not already done so is from the Oct 17 New Yorker - a 12 page profile with an extensive interview done very recently, his final in depth interview. He is a man accepting his mortality, and indeed he seems impatient to get on with the next step. Here is the link: http://www.newyorker.com/magazine/2016/10/17/leonard-cohen-makes-it-darker.

Like the concerts, the last few CDs by Leonard Cohen show a much different side of the man. They were a great deal more musical. It was also some of his very best writing. Ironically his last CD was released this year was called YOU WANT IT DARKER. It seemed a fitting end. “Treaty” stands out from the effort.

Tweet
Published in News & Events
More in this category: « Leon Russell — One of Rock’s Most Respected Musicians and Songwriters Greg Lake — The L has joined the E »