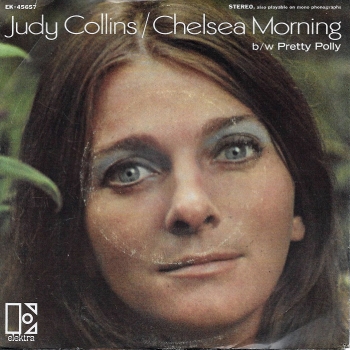 The picture on the cover only gives you a small idea of just how striking the eyes of Judy Collins are. In my book “Confessions of a Teenage Disc Jockey” I relate just how distracting her eyes are when you to talk to her face-to-face. They almost don’t seem real.

I am certain that I’m not the only person to cast under the spell of her eyes. Stephen Stills wrote the song called “Suite Judy Blue Eyes” after he too was enchanted by her sparkling blue eyes.

Those eyes can still captivate after all these years and so does her voice. At age 76 Judy still does some limited engagements. If given the opportunity to see Judy Collins live, try and get a front row seat so you too can be taken in by both her voice and the eyes that look totally unreal!

Tweet
Published in The Archives
More in this category: « Excerpt from Confessions of a Teenage Disc Jockey by T. Morgan Featured 45: Larry Williams, Slow Down & Dizzy, Miss Lizzy »