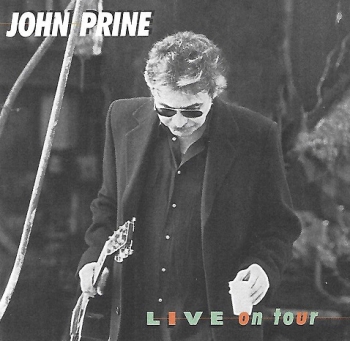 The first song that came to mind when hearing of his passing was “Please Don’t Bury Me”. Not only because of his death, but his attitude toward it. Listen to the words. He laughed - even at death. Lines from the song where he asks not to be buried but to have his parts cut up and passed around. include “to the deaf can take both of my ears if they don’t mind the size” , “Give my stomach to Milwaukee so they don’t run out of beer”, ‘Venus De Malo can have my arms”, ‘Give my feet to the footloose, give my knees to the needy”. He found humor even in death.

In “Sam Stone” he sympathized with the returning vets from war that came home a different person than when they left. He showed the same concern for old people who are forgotten in “Hello in There” and other lonely people in “Donald and Lydia”. Then he could turn around and make light of people’s problems in a song like “Dear Abby”.

John Prine was also good at pointing the finger at things that he felt were just not right. He is critical of men who shirk their responsibilities in “Unwed Fathers”. He used symbolism in his “The Great Compromise” to point out what was wrong with government.

This page could be filled up with comments on his great songs. John Prine the two-time Grammy winner and member of the Songwriters Hall of Fame. was admired and covered by a wide range of people Bette Midler, George Strait, Carly Simon, Johnny Cash, Joan Baez and Carl Perkins are just some of the stars who recorded his songs. One of his best covers and known songs is “Angel from Montgomery”. The story of a woman stuck in a very bad marriage was made popular by Bonnie Raitt. The two got to do duet of the song that you can find on You Tube. You should check it out.

There no doubt that John Prine was one of the leaders of the current so-called Americana music. His approach both lyrically and in style made him very much admired by the stars of the genre.

If you never saw John in concert, you missed a great show filled with humor and touching stories. His appearances at The Main Point and at the Philadelphia Folk Festival are legendary. If you missed out, the next best thing is listening to a recording of his live concerts.

While there isn’t one song that could sum it all up, his “Ain’t Hurtin’ Nobody” comes close. He just wanted people to care about each other or to left alone if they aren’t hurting anyone. A great simple message he left behind.