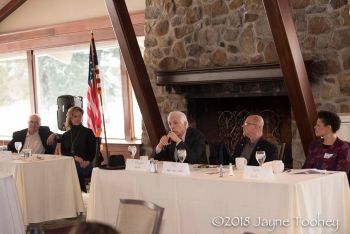 On January 17, 2018 the January lunch and panel discussion of Delco Press club was held at the Springhaven Country Club. In Wallingford, PA.

The panel answered questions from the moderators (Andrea DiFabio and Lorraine Ranalli) and the audience. Both provided very thoughtful questions and got some very informative answers.

The panel considered of several prominent people from radio. The topic of the day was centered on the future of radio.

Those on the panel included:

Sara Lomax-Reese is the president and CEO of WURD Radio in Philadelphia. She is credited with transforming WURD from a struggling legacy talk radio station into a multi-media success. Most recently they have expanded to simulcasting on 900 AM and 96.1 FM. She spoke brilliantly about the struggles of the station and what they are doing survive in the market place. Her leadership has made the stations and their magazine outlet very viable in the marketplace.

Jodie Summers has been getting country fans in the Philadelphia Area the wake- up call every morning on WXTU 92.5 for over twenty years. She spoke about her connection to her audience as her means of maintaining her position as one of the most respected Country Music DJs in this country. Jodie has won all kinds of awards for her abilities including Country Music Award for THE BEST MAJOR MARKET PERSONALITY. She pointed out that one of the most important ways to stay connected is to very active in the community. The list of charities that she has been a part of are far too many to list.

Steve Butler is the director of news and programming at KYW. He oversees a staff of some 70 people and pointed out the challenge of staying up with coverage and being relevant to the audience. Keeping such a large staff is important to staying on top of the news, but it is hard and costly to maintain such a large staff. The station has been able to incorporate modern social media and other means of communication in order to keep the AM brand alive. He stressed keeping on top of all media resources as extremely important in attracting a younger audience.

T. Morgan the very successful DJ and radio programmer at several radio stations told the story about how he was asked at a conference in 1976 what he thought the future of radio would look like. He said his answer still applies today. The successful radio station has to seek out a portion of radio listeners that identify with what you are doing. You become the best at doing whatever that is and carve out enough of the ratings to attract revenue for the station. He also said that he holds out great hope for the future of radio. He said that many times in history forecasters said that radio was dead, but yet today there are more people listening to radio than any other media outlet.

Joe Morinelli a longtime radio veteran, has launched the RADIO VOICE OF ITALIA. It a local program that is heard on internet radio. He pointed out how by 2020 all new cars will access to internet radio. He feels that internet radio is the wave of the future because they can deliver targeted audience radio at a much lower cost that the current AM/FM stations. He also pointed out that finding a loyal select audience will enable the internet station to provide commercials with a target audience for less money. He and some others pointed out that social media seems to have peaked and those business who bought aids are finding that it not money well spent. Radio can deliver their message much better.

Marilyn Russell who does mornings at WOGL was also scheduled to be on the panel, but was unable to attend due an illness.