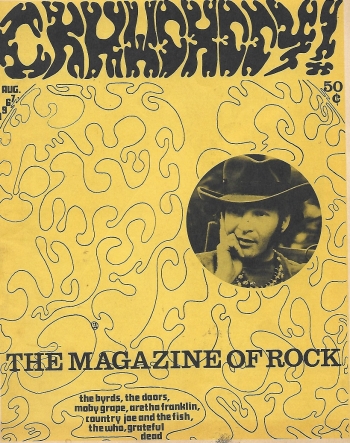 The music was also a major part of the attraction that was noted worldwide. Eric Burdon and The Animals did a song called “San Franciscan Nights” that told the story of what seemed to be happening in the streets of both San Francisco and Berkeley. Nightly shows from groups like The Jefferson Airplane, The Grateful Dead, and Country Joe & The Fish (their “Fixin’ to Die Rag” was a bitter commentary on the war).

For many the music was much more of an attraction than the “Hippie” lifestyle. It was the music as much as anything that brought attention to not only the war, but some social changes that were needed.

Record companies and magazines were starting to take note. Time and Newsweek wrote major pieces on the “Hippies” and the changes they were trying to bring about. Rock magazines like Rolling Stone and Crawdaddy started up and wrote about Rock music with the same kind of respect that had been given to Jazz and Classical music.

The August issue of Crawdaddy (as seen in the picture) was the first issue that I bought. It was amazing to see details about everything. The cover story (with The Door’s producer Paul Rothchild shown) was very in-depth. Despite being printed on less than slick paper, the articles were well written and intelligent. Who would have thought that those two descriptions would ever be used in relation to any Rock stories? Prior stories were more like teenage fan club releases.

This was not just a Haight-Asbury thing. That August Crawdaddy did have a “report from San Francisco”, but it also had a report from Boston and one from London. Great stories about Steve Winwood’s new group Traffic, The Who and evolution of The Blues Breakers to Cream were also featured.

This new music was becoming worldwide flood. It was the beat of the youth of the world who were restless and certain that they could make a better world than was left to them by their parents. The so called generation gap was born. “Don’t trust anyone over thirty” was the cry.

Unlike many of my age at the time, I had very little interest in going to see the “hippies” on the West Coast. I wanted to take advantage of the summer break from school to go to England. My sister Pat was working for an airline company at the time and was able to get me a very cheap round trip ticket to London. Once in the city on Thames, I stayed in a youth hostel. For very little money you got a small room with a bed. Like many dorms, it had one bathroom per floor and it always seemed to be occupied. Once you were finally able to take a shower, you could be sure any hot water there might have been was gone. But it didn’t matter. You were in London! My hostel was close to the tubes (London’s subway system) and you could walk past Brian Jones’s flat on the way there. I even saw him dash off in his car one night.

If there was a theme song to the “Summer of Love”, it wasn’t coming out of the Bay Area, but from The Beatles in England. A smile still comes to my face when I recall a bus trip to Stratford-upon-Avon, the birthplace of William Shakespeare. The entire bus filled with college agers was making the bus sway as everyone on board sang “All You Need is Love”. Everyone knew every single word.

London itself was filled with a new wave of art, fashion and music. While I never visited San Francisco during the “Flower Power” days. I’m certain that “Swinging London” was every bit as interesting to see unfold. There was Hyde Park for be–ins, Piccadilly Circus if you wanted to see Anti-war demonstrations, Carnaby Street for fashion and just around the corner on Waldour Street there was the world famous Marquee Club. This small club was the launching pad for so many groups like The Who, The Rolling Stones, Ten Years After, Yes, Jethro Tull, The Yardbirds, Jimi Hendrix, Fleetwood Mac, Pink Floyd, etc. It didn’t cost all that much so I was there almost every night and met many future stars.

I was so certain that this new wave of music was going to sweep the world that I told my new found friends that I was going to go back home and start a new format that would cater to playing their music. I guess I was pretty convincing because some of the groups I met gave copies of their music so that I could play it on the air.

That trip home came sooner than expected due to lack of funds. Almost as soon as I touched down in the first week of August, I was off to find a radio station that would listen to my idea. It wouldn’t be the first - Tom Donahue was hired by his former PD at WIBG to do “something” to save radio station KYA in San Francisco. He brought with him a fellow WIBG alum, Bobby Mitchell. In the spring of ’67 Donahue was convinced that top forty on AM radio would be dead in the future so he launched a new format at KMPX FM. They were only playing the new music in some day parts, but it became so popular that August 6, 1967 the format was expanded to include the entire station. Even before it went full time, KNPX became the voice and music for the “Summer of Love” for the city.

Around the same time that Tom Donahue arrived in San Francisco, another top forty refugee, Scott Muni, bought the new sound to town on WOR-FM. Apparently the big apple wasn’t ready for it then because WOR-FM failed and gave up on the music in very short order. However, a year later in the summer of ’67, Scott launched WNEW-FM. He was the mainstay at the station until he died in 2004.

In August of ’67 there was no way to hear what either of these radio legends were doing on the air. As a result I had to start the format from scratch. Details on what I did to launch the new format in Philadelphia and about my trip to England that summer are in my book - CONFESSIONS OF A TEENAGE DISC JOCKEY.

Later I did become friendly with Scott when I was PD at WMMR. We spend some time together talking and I was surprised to find out that he was a former Marine. Imagine, a former Marine launching a format that many called “hippie radio”.

While I was not the first in the country to play the new Rock, I was the first to play it in Philadelphia when on August 16, 1967 WIFI signed on with the first song in the new era. It was “San Franciscan Nights” by The Animals. It is hard to believe that it has been 50 years since “The Summer of Love” and my first day on the air at WIFI. The music is still popular and shows very little signs of aging. I am very proud to have been a small part of the beginning and to be able to still play the music on the radio. LONG LIVE ROCK!!!