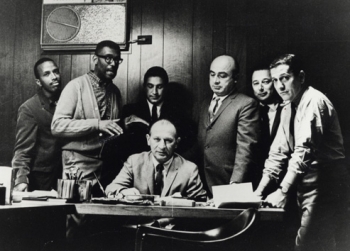 Chess brothers in their office, Leonard is sitting down and Phil is looking over him to Leonard’s left

Phil and Leonard Chess were very young refugees from Poland after World War II in 1945. As Jews they were most fortunate to have survived the war and they came to Chicago in hopes of starting a new life. Their first venture was owning a liquor store in a very tough African American neighborhood in the Southside. While many felt at the time it was a foolhardy idea, the brothers felt that since most of their customers would also be refugees from the South, they would have a great deal in common and that they would be accepted as such. They were right. The success of the store led to the opening of a night club in the same neighborhood. Their Macomba Club became THE upscale club and the home of electric blues.

In 1949 Evelyn Aron who owned the Aristocrat Record Company along with her husband talked the brothers into joining them in their enterprise since there were so many artists preforming at their club. The partnership didn’t last long because the Chess brothers bought out their partners in 1950. Soon after that they changed the name of the label to Chess Records.

It was such a natural thing since anyone worth his or her salt in the blues came to the Macomba Club. The very first act that Chess fell in love with was Muddy Waters. They recorded him doing songs that were a huge influence on The Stones. “I Can’t be Satisfied” and “Rollin’ Stone” are just two examples. Muddy was more than an influence on The Stones, he is considered to the father of electric blues. Muddy realized very early on that playing the acoustic country blues that he brought with him when he traveled up from the South wouldn’t work very well in the rowdy clubs of Chicago. So he came up with the idea of being plugged in just so he could be heard. His band became the prototype for all the Rock bands that followed with the lead, bass and rhythm guitars along with drums and a killer harmonica player named Little Walter.

Those early blues artists were as rough and tumble as their music. The perfect example is “I’m Ready” a song that was sung by Muddy Waters and written by the bass player and the best blues songwriter Willie Dixon. The song is the story of a man going into a bar to have a good time. One line in the song “I’m Ready” jumps out at you as a perfect example.

Soon Chess Records owned the Chicago music scene. The list of artists on their label contains many who went on to the Rock ‘n’ Roll Hall of fame. Besides Muddy Waters there was Chuck Berry, Bo Diddley, Etta James, Willie Dixon (who was best known for writing so many hit songs), The Flamingos, The Moonglows, Howlin’ Wolf, Memphis Slim, Buddy Guy, John Lee Hooker and Sonny Boy Williamson just to name a few. On top of that, the brothers bought a radio station WVON in Chicago which went on to be the number one station by playing the very music that was on Chess Records.

Years ago I had a long conversation with someone who had firsthand knowledge of the record company. Harvey Fugua, who was a songwriter and the lead singer of The Moonglows, spent more than a few hours in the Chess offices. He described to me what he saw there.

The thing that surprised him the most was just how small this store front operation was. You could hardly turn around in there. The office doubled as a recording studio and warehouse. The piles of records were used as baffling when they were recording!

The other thing that stood out was that it seemed like there was always one or more of the recording artists in the office. Sometimes they were there with an idea to make a recording or just to hang out. Most often they were there trying to get some money out the Chess brothers. Both Phil and Leonard realized early on that it wasn’t a good idea to give a lot of money upfront to their roster. Many of them lived the life of wine, women and gambling and always seemed to be broke. Money apparently was put aside for such times. Those problems were most often left up to Phil with Leonard being on the road a great deal.

While Phil and Leonard were equal partners, even Phil would admit that Leonard was the driving force-literally. Leonard would load up his car with records and head south. Along the way he would stop at record stores and radio station to pitch the latest efforts from the fledgling label.

There was more than one reason that Leonard spent so much time on the road. He was always on the lookout for new talent everywhere. He would drive anywhere to hear someone that he was turned on to from cities and small towns all over the Midwest and the south. In addition, back in the late forties and early fifties when the independent record companies started up they were at a big disadvantage in their competition with the big major labels. The majors had distribution throughout the entire country. They had many local outlets that would supply records to the local record shops and radio stations.

Like the other small labels, Chess had to take their product directly to the radio stations and record stores. This limited them most often to have only “regional” hit records that didn’t sell as much as the big national hits. So Leonard not only had to use his car as a truck supplying the record stores and radio stations, he would often stay in the town where he dropped off records for a day or two to see if the record was getting played and if it was selling. Since the major labels had the money to “buy” space in the record stores leaving little or no room for the upstart labels, Chess and the other small labels would go anywhere to sell their records. Jukeboxes in bars, drug stores, food stores, barber shops and beauty salons would often take records on consignment. It was huge uphill battle. A battle that the small labels won, but lost at the same time.

When they did have hit records the major labels would offer more money to the acts and steal them away or more often copy the R & B hit and cover it with a white artist. The biggest benefactor was Pat Boone who made a career out of making cover records of some of the early R & B and Rock ‘n’ Roll stars who couldn’t get played on the radio.

At first the major labels turned their noses up at R & B or R & R, but soon realized that they were only hurting themselves and losing lots of money in the process. Even Mitch Miller who was the main man at Columbia Records who said that he would NEVER sign a Rock act gave in by the 60’s. Once the majors decided to go all out to promote Rock or R & B, they pretty much put all of the smaller labels out of business or bought them out. However it must be remembered that because of hard working pioneers like the Chess brothers who were willing to put the money, time and effort into developing their small labels, Rock ultimately became the biggest genre of music.

Tweet
Published in The Archives
More in this category: « Sam Phillips and Sun Records, the Farmhand Who Went From Picking Cotton to Picking Superstars Gene Autry: The Singing Cowboy and His Challenge »