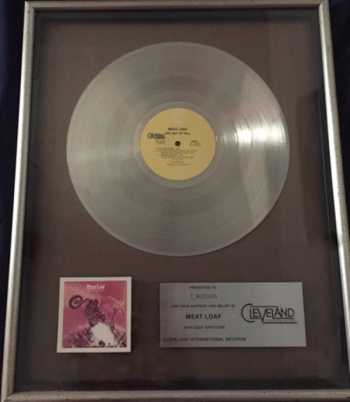 It turned out that Steve’s new project was more than a new record, but he had started his own record company. Since Steve grew up in Cleveland, he decided to call his new company Cleveland International Records. His hope was that he would have the same kind of success that Gamble & Huff had with Philly International.

The first record on Cleveland International was the release of a tape that came across his desk while he was still at Epic Records. He LOVED it! Since he was one of the label’s chief talent scouts, he was convinced the label would sign the act based on his recommendation. It was quite a shock to him that there was no interest in the album. In fact NO record company wanted to take a chance on this tape.

Popovich was so convinced that this was going to be one of the biggest selling records of all time that he launched his own label just to get the album released. He shared that unbridled enthusiasm with me on the day he kept the appointment. He bubbled over as he explained to me that this album had been in the works for around six years. The record centered around two artists. One Jim Steinman and the other Marvin Lee Adair. Jim had worked on writing and playing music for a number of Broadway style musicals. It was during that time that he met Marvin Lee Adair who took on the stage name of Meat Loaf.

They both felt that they were the perfect team. Jim wrote the music and Meat Loaf was the front man. Meat Loaf had gained some notice by being in the cult film called “The Rocky Horror Picture Show” and was an energetic showman. Marvin claims that the name Meat Loaf came from his Texas high school football coach. He used it as a negative statement on his weight. He ended up wearing it as a badge of honor.

During the time that Meat Loaf was performing on “The Rocky Horror Picture Show”, he and Jim started working on their own musical. After Rocky Horror, Meat Loaf joined the comics known as The Traveling National Lampoon Show. He had been the back up for John Belushi who was a close friend. It was also during that time that the two met another good friend Ellen Foley. Jim and Meat Loaf didn’t get serious about recording the album until Meat Loaf decided to leave the traveling National Lampoon show.

When it came time to record the album BAT OUT OF HELL, Ellen was asked to sing the female part in the song “Paradise by the Dashboard Light”. Her amazing performance on the song earned her a record contract. Despite her great voice, she didn’t make as a singer, but did land a major role in the popular TV series called “Night Court”

During his visit with me Steve Popovich told me another story about the recording of “Paradise by the Dashboard Light’. The long story of a girl and boy parking and making out was given a play by play by the famous New York Yankee announcer Phil Rizzuto. The play by play was added on after everything else. Steve said while he really wanted Rizzuto to do the play by play, he was afraid to ask him to participate. He knew that Phil was a very conservative guy. If Rizzuto knew what the lyrical subject matter was, he probably would not have taken on the part of the announcer. The Yankee announcer had no idea what his work was being used for until the album came out. By then it was too late to back out.

Everything came together for the final recording when Philadelphia’s own Todd Rundgren heard the music performed and decided he wanted to produce the album. It was magical all the way around.

Steve finally finished his long buildup and played the album for me. Because of the buildup I was concerned that it was part of the kind of hype that record execs often give a new act that they want to promote. It didn’t take long before my skepticism was replaced with wonder. How could so many record companies pass on this record I asked myself. To me it was a no brainer. This was going to be a SMASH hit record. I told Steve to let me know when the record was released and it would be on the air that very day. Popovich beamed. That was what he wanted to hear and he left thanking me over and over while shaking my hand. He said when the record goes gold I would get a gold record for my help. He kept his word and sent me a platinum record instead of gold that is still hanging on my office wall (see picture).

BAT OUT OF HELL went onto become one of the biggest selling records of all time. Just as Steve had predicted, the album has sold a reported 43 million copies to date and continues to sell at a rate of about 200,000 per year. It was so popular the sequels BAT OUT OF HELL Two & THREE, also sold well. The initial album for Cleveland International turned out to be their biggest. Steve continued to have some success until his death on June 8, 2011.

Jim Steinman went on to write music for several other performers and despite some hits, none were able to out sell the first record with Meat Loaf. Meat Loaf is still performing the songs as he still tours internationally.

Tweet
Published in The Archives
More in this category: « The Blues and Classic Rock Unsung Heroes Series: Donald Elfman — A Name You May Not Know, But Should »