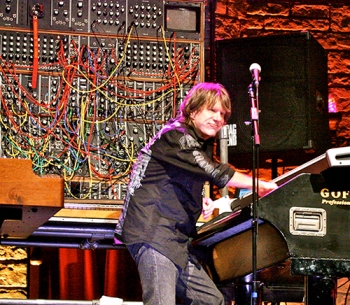 Once The Nice disbanded, Keith teamed up with two other outstanding and well established musicians to form Emerson. Lake & Palmer. It was quite a musical marriage. Greg Lake came from one of the most progressive groups of all time King Crimson. Carl Palmer played with two very theatrical bands, Atomic Rooster and The Crazy World of Arthur Brown. The combination made for an outstanding live show with a sound that went right through every part of your body.

The big debut for this new “super group” was at the Isle of Wright Concert. I was scheduled to interview the band at the huge English Concert, but was unable to do so. Details on why and how this happened are told in my book “Confessions of a Teenage Disc Jockey”.

My first real opportunity to talk to Keith and the rest of the group came after they had soared to great success. Keith was a real gentleman. I thought I was dining with an English nobleman. He knew so much about wines and what went with them that I was completely lost by his conversation. If you didn’t know better, you would never guess in a million years that Keith Emerson was a Rock star.

Photo Credit: Keith Emerson performs on his Hammond and Moog synthesizer during the Emerson & Lake Tour 2010. This was taken at their final show in Atlantic City, NJ, USA on May 15, 2010 by Mari Kawaguchi licensed under CC BY 3.0.