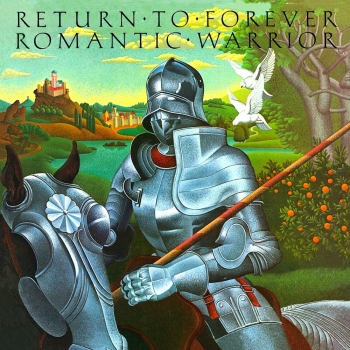 Chick Corea — LIGHT AS A FEATHER and THE ELEKTRIC BAND

Return to Forever — HYMN OF THE SEVENTH GALAXY, and ROMANTIC WARRIOR
You can’t go wrong on anything this group did. Outstanding personnel that included Chick Corea, Stanley Clarke, Al Di Meola, and Lenny White were the mainstays of the band. They broke up in 1983, but reformed in 2008. Again they disbanded and in 2010 a new RTF surfaced with Chick, Stanley, Lenny and Jean-Luc Ponty. They released a live album called THE RETURN OF THE MOTHERSHIP that is worthwhile. While their website says they are still together, they haven’t recorded or toured of late.

Stanley Clarke — SCHOOL DAYS
Oddly enough I first met this Philadelphia native in Dallas, Texas. We were both there for the World Premiere of the BUDDY HOLLY STORY film. We talked about our mutual friend Jazz great Byard Lancaster. We both spent a lot of time with Byard (I produced him and Stanly was in Byard’s band at one time) and thought it rather strange we both had to travel from Philadelphia to Dallas to finally meet each other. Stanley remains one of the all -time great bass players.

Crusaders — SOUTHERN COMFORT, IMAGES
They started out as The Jazz Crusaders, but shorten the name when they started doing funky Jazz. Joe Sample is outstanding on keyboards.

War — THE WORLD IS A GHETTO
Jazzy funk at its best.

Ten Years After — UNDEAD
This early live album isn’t really Fusion Jazz, but more a combination of blues and more traditional Jazz. However, it is a great live album and their version of the Jazz tune “Woodchopper’s Ball” makes having a must.

The Allman Brothers — THE FILLMORE CONCERTS
This fantastic live album is right there with UNDEAD as one of the best live albums ever. Like Ten Years After, The Allman Brothers were combining Jazz, Blues and Rock in their performance. The record was produced by one of the all -time great producers Tom Dowd and mixed by Jay Mark (old friend that worked with me at WDAS-FM). It was Tom Dowd who convinced the band to not go with their original idea of having horns play with them at the concerts. Dowd felt that the horns were just not as tight as the rest of the band didn’t mind telling the group as much. The end result was some of the passages on the album had Jazz like jams that were every bit as seamless and tight (listen to “In Memory of Elizabeth Reed”) as any Jazz band.

John Schofield — AU GO GO
Schofield is one of the all- time great guitarists who has played with some of Jazz’s best. In this album he is backed up by Medeski, Martin & Wood. Almost any album with Schofield and this trio is a good listen.

Medeski, Martin & Wood — THE DROPPER
The trio who backed up John Schofield stepped out on their own. This album was released long after the peak time for Fusion, but is very much in the funky groove.

Jaco Pastorious — JACO PASTORIOUS
This is one of the best albums ever featuring a bass player. Jaco, who was born in Norristown, PA, was the son of a drummer. He was all set to follow in his father’s footsteps as a drummer when he was hurt playing football. The injury required surgery that made it impossible to play the drums so Jaco switched to playing the bass. That injury gave us one of the best and most innovated bass players of all time. He was also with Weather Report during the group’s most productive years. While this self-titled album is less than perfect (song selection and vocals), it was a milestone record that showed just how much a bass player can stand out.

Passport — LOOKING THRU and CROSS COLLATERAL
This group was the brain child of German musician Klaus Doldinger. While Passport recorded several albums, they were less that a commercial success. Klaus, a multi- instrumentalist, became much better known for writing scores for films.

Santana & John McLaughlin — LOVE, DEVOTION & SURRENDER
Carlos Santana has used more forms of music in his own work than just about any artist. He has successfully used Latin, African, Jazz and Rock music to make a very unique sound that he is always trying to improve. He was a big fan of Miles Davis and his music. Santana’s music is considered Jazzy enough to have been invited to play at the Montreux Jazz Festival. During his many incarnations, Santana has recorded a few fusion Jazz tunes, but the LOVE, DEVOTION & SURRENDER album recorded with John McLaughlin is considered the only Fusion LP.

Steely Dan — AJA
Just about everything that Steely Dan does is flavored with Jazz, but AJA is the best example of their unique ability to combine Jazz, Rock and Pop.

Weather Report — I SING THE BODY ELETRIC, SWEETNIGHTER, MYSTERIOUS TRAVELLER. BLACK MARKET, & HEAVY WEATHER.
It is very hard to single out the best albums done by Weather Report because just about everything this group did was among the best of the Jazz Fusion albums. Joe Zawinul and Wayne Shorter are true giants. Other came and went in the band but this two remained as the pillar in the music they played. Both put out solo LP’s that are also very worthwhile.

Brand X — LIVESTOCK, UNORTHODOX BEHAVIOR
You haven’t heard Phil Collins drum if all you know is his work with Genesis. With Brand X he really gets to show his chops. The group was more than Phil Collins however. Some pretty good performances all the way around.

When compiling a list like this everyone is sure to leave out some outstanding efforts and I’m sure I am as guilty as anyone with this list. Care to add your own? Just e-mail me. I’d love to hear your thoughts.

Tweet
Published in The Archives
More in this category: « Bruce Springsteen's Born To Run — The Book Mitch Schecter — From the Streets of Philly to the Beach with The Rip Chords »