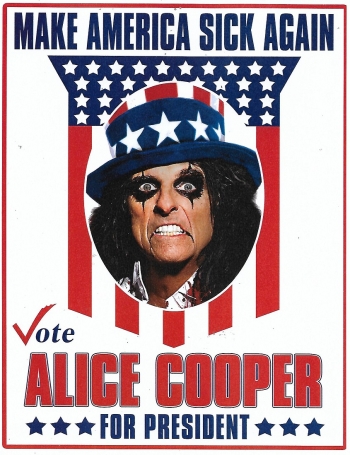 Alice Cooper is running for President. He declared his candidacy at his big news conference on July 26. Some would argue that we couldn't do much worse with the present slate of candidates. His main slogan is “Make America Sick Again”. Others include “A Troubled Man for Troubled Times”, “The Whole World has Gone Crazy – Vote for Alice.”

Of course Alice running for president really isn’t new. He has run in every election since 1972. This time is a little different since many think the race for president is a horror show anyway so Alice fits right in.

Alice was born Vincent Collier Furnier in Detroit, Michigan to very religious parents. Both his father and grandfather were preachers. Vincent was also active in the church at ages 11-12. His family moved to Arizona because of health issues when the future rock star was in elementary school.

The first time I met Alice Cooper we didn’t even talk about music. During his stay in Philadelphia I spent most of the day with him and we talked about a sport that we had in common-running. Much to my surprise Vincent was an outstanding cross-country runner while attending Cortez High School in Phoenix. In fact, his team was so good that they won the cross-country state championship. Yeah, I know. I found it hard to believe too so I looked it up and it is totally true!

His coach was the former Olympic runner George Young. The training methods used by this coach were not ones that I believed in and Alice and I spent a great deal of time going over the pros and cons of his coaching style.

Not only did Alice run in high school, but his original band was made up of members of his team. At age 16 they formed a band that they called The Earwigs. Despite not really knowing how to play any instruments they won a local Letterman talent show. Winning this talent show gave them all the bug so they became serious about playing their music.

Soon they changed their name to The Spiders and played all around Phoenix. At first they sounded very much like the groups that influenced them: The Beatles, The Kinks,The Who and The Yardbirds. The only stage prop they had at the time was a huge spider web as a backdrop.

By 1967 the group was considered good enough to attract gigs in Los Angeles. Before they became popular they decided to change their name to NAZZ (not knowing about the Philadelphia band with the same name). Once they discovered the name was already taken, they began a search for a new one. Legend has it that the search ended when Vincent contacted a witch named Alice Cooper on a Ouija board and decided to use her name. Vincent says, while it makes for a great story, it never happened.

The name Alice Cooper was chosen because Vincent thought the group needed to do more to attract attention. This was the first of many “gimmicks” that the group used. Believe it or not, the name actually came from a character on the TV show Mayberry R.F.D. The character of Alice Cooper was played by an actress whose real name was Alice Ghostly.

At first Alice Cooper was just the name of the band, but eventually Vincent took the name for himself since most people were already calling him Alice. The band members still own the name and Alice pays them for the right to use the name. The Alice Cooper stage show grew more and more outrageous. The act was inspired by Vaudeville, Detroit rock and horror movies. The makeup worn by Alice was a copy of that worn by Betty Davis in “Whatever Happened to Baby Jane”. The act on stage featured fake blood, beheading on a guillotine, deadly snakes, electric chairs, and anything else that would shock people.

The group grew from the one that was first signed by Frank Zappa who encouraged the use of their new image, to a huge selling international success. In 2011 Alice Cooper (both the band and the person) were inducted into the Rock and Roll Hall of Fame.

The road there wasn’t always smooth. Success and constant touring led to Alice becoming an alcoholic. During those wild personal life days he met some drinking buddies in Hollywood who eventually became known as the Hollywood Vampires. He spent time staying up all night in talks with the likes of John Lennon, Ringo Starr, Harry Nilsson, and Elton John. He even co-wrote a song with Bernie Taupin.

In 1978 he finally went to rehab. Unlike many who are in and out and in again, Alice stuck to his new life style. In fact, he would often tell other rock stars who were having problems with drugs and alcohol that they should not only clean up their act, but there was a life after.

Golf is given credit for the way Alice Cooper stays sober. He has become as addicted to the game as much as he was to drinking. This has led to him not only be a great golfer, but golf celebrity. He is on the golf tour as much as he is on the rock tour.

His off stage personally is very engaging. Everyone likes him. People in Hollywood liked Alice enough to have him take part in things like the TV show Hollywood squares and even offer him parts in movies. I found him to be very down to earth with a great sense of humor. He certainly is nothing like the person he portrays on stage.

So, is Alice Cooper serious about running for president? He says that he is pretty much apolitical. In this day and age that might get him elected. Where does he stand on the issues? One thing he will make very clear is that he used to argue with his much more liberal friends all the time. He suggested that might make him a moderate. Whatever that means. All he knows is that, as his song goes, “I Wanna be Elected”.