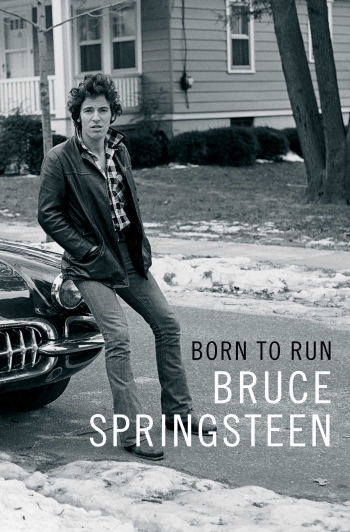 Like so many of us that grew up around the time that Rock ‘n’ Roll was one of the biggest influences on our behavior, Bruce didn’t have any notion of what he wanted to do with his life until he saw rockers on TV. The Ed Sullivan Show caused many young males of that time period to find a way to learn how to play a guitar. Those early efforts by Freehold’s most famous resident are as heartwarming as they amusing.

Also like many of us, family life played a major role in shaping the person who would become known as the “Boss”. Because his father was a mean drunk, Bruce had no interest in using drugs or alcohol while he was growing up as well as when his band first started to tour and make a name for themselves. The very complex relationship the father and son is a reoccurring story throughout the book.

“We honor our parents by carrying on their best forward and laying the rest down” relates the Rock star in the book. “By fighting and taming the demons that laid them low and now reside in us. It’s all we can do if we’re lucky. I’m lucky.”

While the father and son had many issues, the rest of the family was very close. Bruce had a very special relationship with his grandmother. Toward the end of her life finances forced the grandmother to live with the Springsteen family. She had the luxury of having her own bed. Bruce’s young sister was the only one who ever slept with grandmother. It happened one night when for some unexplained reason the three year old sister crawled into her grandmother’s bed in the middle of the night. The next morning the family woke to learn that the grandmother had died in the middle of the night with little sister asleep next to her.

There are many tales of Bruce’s early efforts at getting a band off the group and the characters who were part of the effort. There’s some humor in the stories of how he and his friends beat the draft. Then later some guilt because many of his high school friends either died or had their lives altered by wounds (both mental and physical). Despite many setbacks, Springsteen was more than determined to make a living as a musician. Once he finally made the big time, there was some real soul searching on his part. It is all very fascinating reading how everything unfolds.

Springsteen gave a great description of his voice and how he made up for not having a great one by packing as much emotion as he could into the lyrics and the presentation of his songs. Dylan was his best model because he too didn’t have great voice but did have a lot of emotion in his music. In the book Bruce has this perfect description of what he learned:

I learned the most important thing was how believable you could sound. How deeply you could inhabit your song. If it came from your heart, then there was some ineffable element “X” that made the way you technically sounded secondary. There are many good, even great, voices out there tied to people who never sound convincing or exciting. They are all over TV talent shows and lounges in Holiday Inns all across America. They can carry a tune, sound totally impeccable, they can hit all the high notes, but they cannot capture the full emotional content of a song. They cannot sing deeply.

Just about the only minor disappointment for those of us who knew Bruce before he became a huge star, was his failure to give much (almost none) to his early believers in Philadelphia. Many of us in radio got to know him when he was sleeping in the back of his van. In my book CONFESSIONS OF A TEENAGE DISC JOCKEY I relate some of the stories that happened in those early days. His appearances at the Main Point and the WMMR live concerts were major factors in creating a following for Springsteen and his E Street Band. That led to him selling large numbers of records in this area. In fact, Philadelphia fans bought more records than all the other cities in the US combined. It kept his career alive until he had his first real hit record.

Bruce did mention that those of us in radio were a huge stepping stone in his career. He even mentioned that he slept on the late great Philly DJ and co- worker Ed Sciaky’s sofa more than once and that David Dye (both at WMMR at the time) came up to him at the Main Point and said “I love your band”, but never gave due credit to his fans here. The record company did see fit to award some of us a gold record for BORN TO RUN (see photo) for all we did to ensure the success of their artist, but a little more gratitude could have been given to those early fans who really believed in him to the point where Bruce Springsteen was already a superstar here before most of the rest of the world had any idea who he was.

Still, these are minor points and they don’t detract from the merit of the book. One of my favorite quotes in the book is one that relates to time:

You can blow your fortune, should you be lucky enough to obtain one, and make it back, damage your reputation and, with effort and dedication, often restore it. But time…time lost is gone for good.

This book is more than worth your time. Even if you are not a huge Bruce Springsteen fan. 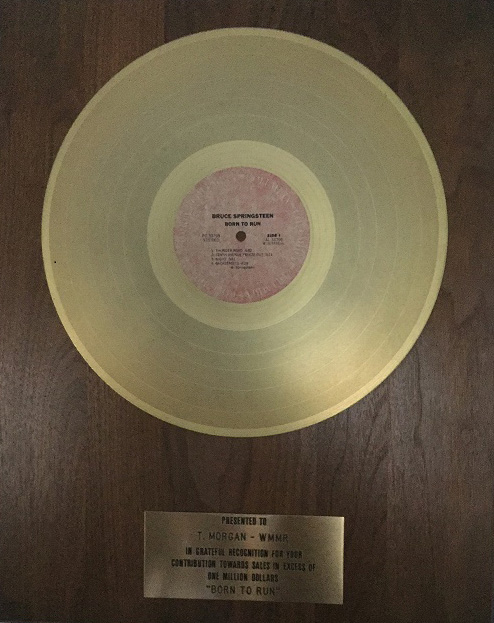