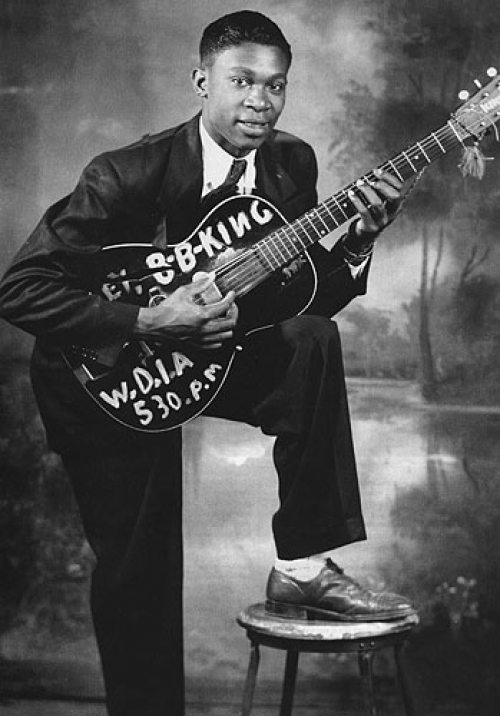 Riley King was born on September 16, 1925 on a plantation in the very small town of Itta Bena, Mississippi.  His earliest attempts at a music career came when he was a kid and went on the streets of the local cities and played for pennies given to him by people passing by. It was enough to convince him that his calling was in music.

To that end, in 1947 he decided the best place to launch his career was in Memphis so he stuck his thumb out and hitched his way there.  When he arrived three things happened that shaped his music.  First was his working on his style with his cousin Bukka White. While Bukka never made a big name for himself, he is still considered to be among the best and most influential blues men of all time. Bob Dylan, for example listed Bukka as one of his early favorites. B B got his first break when he was asked to open for the legendary Sonny Boy Williamson. The show was broadcasted on a local radio station and his presentation led to WDIA radio station hiring him with the radio name of Beale Street Blues Boy on the air. That name was soon to be shortened to B B King.

It would be a couple more years before he gave up his radio gig and did some recording. He had a few “hits” on the so called race music radio stations like WDIA in Memphis. This led to the launch of a road trip of one night stands on the “Chiltlin Circuit”.  In my interviewed he explained how hard a life that circuit was.  The “tour” meant playing in countless small southern towns in some of the worst dives known to man for very little money. Often the only nights that they had off were traveling nights.  During the interview he related to me that one year he only had two real days off where they didn’t have to travel or perform.

One of his stories about those long days of performing on the road was the story of his Lucille. One night in the 50’s he was playing a gig in a small club in Arkansas when a fire broke out as a result of patrons fighting and knocking over a Kerosene heater. The club burned to the ground. B B King escaped prior to the fire becoming too bad, but while outside the club he realized that he forgot his $30 guitar.  That was a lot of money for him in those days and of course his means of making a living, so he went back in to get it. It was almost a miracle that he survived getting that guitar back. As a result he personalized the guitar by naming it Lucille as a reminder that he would never risk his life again for a guitar.

After years of this life style, despite having a number one blues hit in 1951 with “Three O’Clock Blues”, B B finally got the attention he deserved. Right after my interview with him in 1969, The Rolling Stones (one of the many groups B B influenced) asked him to go on a national tour as their opening act.   From there his reputation grew and grew.

Before he left I asked him if he ever felt limited just playing the Blues.  His answer is something that not only applied to him, but all artists.  His claim was that you are always limited no matter what you do, after all there are only 88 keys on the piano and we don’t use a lot of them very often.  No matter what music you play you are bound to repeat or copy something without even realizing it.

At a time when many artists are considered to be in their twilight of their career, his took off. He had a big hit in “The Thrill is Gone”.  This led to many new white fans that were able to dig back into a huge catalog of great songs like “How Blue Can You Get?”, “Payin’ the Cost to be the Boss” and “Every Day I have the Blues”. One of my own more modern favorites is U2 and B B together on “When Love came to Town”.  While he no longer played over 300 dates a year, until recently he still toured.  In addition he had three clubs in Memphis, New York and Los Angeles where Blues and Rock artists were able to play in an almost perfect setting.

If you are interested in knowing more about the late Blues legend, there’s his autobiography “Blues All Around Me” that came out in 1997 and the film about his life called “The Life of Riley” that was released just last year.