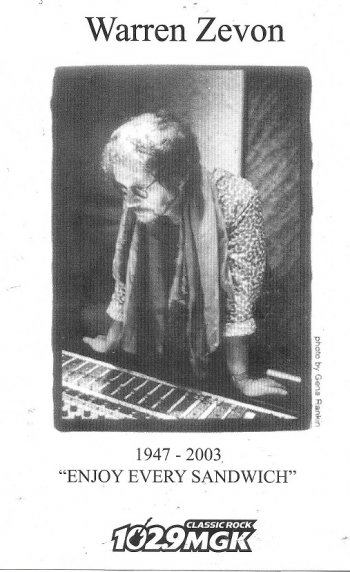 In the 80’s during his time in Philadelphia, Warren was living with fellow WYSP DJ Anita (we worked together at WYSP at the time).  I especially remember having dinner at the old and now long gone Winston’s in center city with the two of them.  While it is true that Anita liked to talk (she was entertaining enough that we all listened), it seemed to me that the person sitting next to her was very quiet and not very excitable.  You would never guess that this laid back man was the same man who wrote so many intriguing, often black humor laced songs. It seemed like the performer was his alter ego.

His bizarre nature could very well be a matter of a strange mixture of genes.  His father was an immigrant Jewish Russian gangster and his mother was a Midwestern Mormon.  That may have not only led to his cynical and biting lyrics, but may have contributed to his OCD (obsessive Compulsive Disorder).   He was always worried about something. He was afraid he was losing his hair, he would do many things that would appear silly like throwing something out because he suddenly decided it was giving him bad luck. Warren avoid all kinds of things because was afraid of them.  His biggest avoidance was seeing a doctor.  He didn’t see one for twenty years and by the time he did, it was too late.  He had terminal lung Cancer.

Once he was given a death sentence, Warren became a good example of how to handle it.  In his typical fashion at a press conference to announce his demise and he said “It would be a shame if I didn’t make it to see the next James Bond movie”.    In his best “I’ll sleep when I am dead” stance, he then went to work on his final album.  The album would make it to number one just after his death.  In addition he went on the David Letterman Show to talk about what it is like to know you are dying.  His best advice was “To enjoy every sandwich”.  A poster of him with that quote is still hanging in the WMGK on air studio. It also was the title of a Warren Zevon tribute album that was released in 2004 featuring among others: Bob Dylan, Don Henley, Bonnie Raitt, Bruce Springsteen, Adam Sandler and Jackson Browne

It was Jackson Browne who first turned us on to Warren Zevon.  Before Jackson kept raving about this truly different songwriter, none of us had ever heard of him. In fact the first time anyone in the Philadelphia heard the huge hit “Werewolves of London” was when Jackson did it as part of his live performance at the Main Point.  It was Jackson who convinced a record company to sign Warren.  Then it was J D Souther.  J D wasn’t a bad songwriter himself, so we listened when he talked in superlatives about Zevon.  We all couldn’t wait to hear this guy Warren Zevon.

The unique approach to song writing didn’t catch on until the success of “Werewolves of London”. All of us in radio loved it from the start, but I wasn’t sure the general public would embrace it until one morning about two weeks after we started playing the song.  I was out for my morning run when a car full of teenagers that were undoubtedly on their way to school drove next to me and stopped.  The window on the passenger side rolled down.  Then out came the chorus of wolf howls from the car.  They rolled the window back up and drove off. I just smiled and said to myself, yeah, that’s a hit alright.

Warren Zevon was the kind of person and writer who attracted many other artistic types besides other musicians.  Among his many friends were Stephen King, Hunter S. Thompson, Dave Berry, Carl Hiaasen and Billy Bob Thornton.

We at WMGK thought enough of the late great Warren Zevon that we did a two hour special tribute to him after he died on September 7, 2003.  I was proud to be asked to be part of that bitter sweet labor of love.

Tweet
Published in The Archives
More in this category: « In the beginning… Robert Palmer »