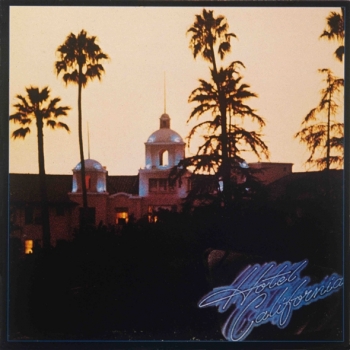 Oddly enough the title tune, “Hotel California” was not the first single taken from the album. That honor went to “New Kid in Town”. Hardly a bad choice since the single went to number one and was awarded a gold record.

“Hotel California” was the second of three hit singles from the huge selling album. It was also a number one record and awarded a gold record. It stayed on the charts longer than any other Eagles tune and is considered to be their biggest hit. The Eagles won the 1977 Grammy Award for Record of the Year for "Hotel California" at the 20th Grammy Awards n 1978.

The lyrics of “Hotel California” are somewhat mysterious. So is the cover. For those who have the single with the picture on the cover or if you have seen the album cover, you may have wondered about the picture of the hotel. Photo on the cover is that of the world famous Beverly Hills Hotel. The history of the hotel goes a long way in explaining the song and why the hotel was chosen as the cover.

When they have been asked what the lyrics were all about, the band has always maintained that it was their "interpretation of the high life in Los Angeles”. There is no better building than The Beverly Hills Hotel to use as the symbol of the high life of LA.

The hotel was known for its many famous visitors. Hollywood royalty could be found checking in all the time during the hotel’s 100 year history (it is now an official historic landmark). Charlie Chaplin, John Wayne, Marilyn Monroe, Humphrey Bogart, Lauren Bacall, W. C Fields, Clark Gable, Frank Sinatra, John & Yoko (who insisted on staying in the same room as Marlene Dietrich) Rudolph, Valentino, Tom Mix, and Will Rogers are just some of the stars. It was not only actors, but playwrights Neil Simon and Arthur Miller were also frequent guys Besides Hollywood royalty, there were even some real royalty that stayed there.

All kinds of kinds of stories of what went on in the little over 200 rooms and 20 bungalows are told. Some stories will never be told. Katherine Hepburn and Spencer Tracy had their not so secret 25 year affair in the hotel. They weren’t the only ones hiding something. John F Kennedy kept a bungalow where he entertained (mostly young starlets). Every time Elizabeth Taylor and Richard Burton got married they stayed the Beverly Hills for their “honeymoon”.

The world’s richest man, Howard Hughes, lived there off and on for 30 years occupying as many as 9 bungalows at once. Legend has it that Hughes used to order a sandwich from room service and would have them deliver it to the crook of a tree outside his room.

Other events of note that took place in the hotel that became known as the “Pink Palace” because of its color include: Many big deals (including the sale of Paramount Pictures) being done on napkins in the hotel’s Polo Lounge. Sidney Poitier dancing barefoot in the lobby after winning his Oscar for best actor in “Lilies of the field”, Peter Finch dying in that same lobby and John Mitchell, who headed the Nixon run for president being there on the day that the Watergate scandal was announced.

Little wonder that The Eagles picked the Beverly Hills Hotel as their cover. There are as many strange stories of the hotel as there are in the song.

If you are thinking of booking a room at the Beverly Hills, I must tell you. I have stayed there. I was totally amazed by how small the rooms were. You could almost reach out from your bed and reached the two walls. I understand that the owners have remolded the entire place since my visit. Good thing. It needed it because it was far from being a luxury hotel.

Then there’s the price. I was on business and didn’t pay or I never would have been there. You can expect to pay close to 1,000 dollars a night. And of course, there’s always the chance that you could check in and never be able to check out.

Tweet
Published in The Archives
More in this category: « Jazz Rock — Part Two Bruce Springsteen's Born To Run — The Book »