Greg Lake — The L has joined the E 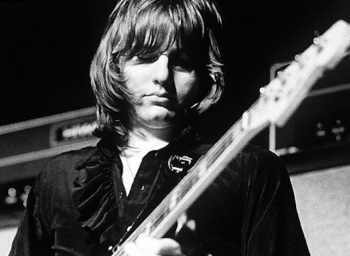 The voice of Emerson, Lake & Palmer has joined his band mate Keith who died just nine months prior. The sad announcement that Greg Lake had succumbed to Cancer was made from London on December 7th.

Very often the contribution that Greg made to music has been overlooked. He was a major figure in the movement that became labeled Progressive Rock. It all started when his mother bought him a guitar at age 12. Within a year he wrote a song that was later recorded by ELP called “Lucky Man”.

While taking guitar lessons he developed a friendship with another student, Robert Fripp. When Robert started a new band called King Crimson, he asked Greg to switch from guitar to bass so he could join the band. Greg agreed to not only play bass, but to sing.

Many consider that King Crimson was the first band to try and incorporate not only the music, but the feeling of classical music in Rock. IN THE COURT OF THE CRIMSON KING remains not only one of the best examples of the genre, but one of the best albums ever made. Greg’s voice and Bass Guitar played a large role in making that album the pillar that it is to this day.

The Keith Emerson and Greg Lake friendship developed when they toured on the same bill. Greg was with King Crimson and Keith with The Nice. They both decided that they both wanted to move on and make a new musical start.

It was a natural move for Greg to move from King Crimson to ELP. The group was a power trio that allowed Greg to showcase not only his voice, but his bass playing more than with King Crimson. ELP was considered to be a super group from the second that the members were announced. Keith had made a name playing keyboards for The Nice. They were very popular in the UK, but only made slight impact in the US. Carl Palmer, who has been a professional drummer since he was 15, was added to the trio. At 18 Carl toured with The Crazy World of Arthur Brown who had a worldwide hit with “Fire”. He also played with another popular English group called Atomic Rooster (one of my favorite names for a band).

It was soon announced that ELP was going to be playing their first concert at the Isle of Wight Concert in August of 1970. I went to England to see and cover the concert as guests of my friends Ten Years After. They also arranged for me to have one of (if not the first) interview with the newly formed group. I detail what happened in my book CONFESSIONS OF A TEENAGE DISC JOCKEY and will not go into great detail in this piece. The interview never happened because of circumstances that were out of both my and the band’s control.

It wasn’t until a few years later that I got to spend time with ELP. We went out to a fine restaurant. It was there that I discovered that all three members were very versed in fine wines. It was a topic that I knew nothing about and felt very lost when the head water and the group started talking about this wine and that year, etc. They were, however, still great company and very interesting to talk to on other topics.

For many the exceptional keyboard work of Keith Emerson was the focal point of the band. Few probably even noticed, for example, that Greg Lake’s name was on their best albums listed as the producer. His bass playing was able to add a dimension that gave the powerful feeling that was the ELP Classical progressive Rock feel.

Greg himself never really liked the label progressive Rock. He said he made the group sound like they were above all the other rockers. In our conversation he pointed out that the one thing that Keith and he shared was their love of, and were influenced by, all kinds of American music including Blues, Country and Gospel. He further stated that they really just wanted to sound different from other bands. They certainly were able to accomplish that.

There is a touch of irony that Greg died during this time of year. Many people remember him best for his solo effort hit in 1975 called “I believe in Father Christmas”.