Gene Autry: The Singing Cowboy and His Challenge 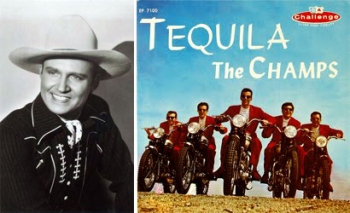 Gene Autry and The Champs

One of the most unlikely owners of an early Rock ‘n’ Roll record label was the star of film and radio, Gene Autry. The famous cowboy with the white hat that battled bad guys on the big screen for many years was also a singer himself. The music that he sang that earned him the title of the singing cowboy was a pop version of Country and Western music that was popular in the 30’s and 40’s.

The legendary good guy was also a very astute business man. When he saw the rise of Rock ‘n’ Roll happening in the 50’s he decided to buy into it. Autry went into partnership with an associate named Joe Johnson who did promotion for Columbia Records. That was the label that he recorded for most of his career.

The first thing that Gene did was find someone who knew something about the music. The first artist that he signed to the new Challenge label came in the form of a good studio musician named Dave Burgess.

The first project that Burgess undertook was to take a group of fellow studio musicians into the studio for idea that he had. An instrumental called “Honky Tonk” by Bill Doggett was a huge hit on the charts. Dave thought that a similar tune would do just as well. He wrote an instrumental called “Train to Nowhere”. He played it for Joe Johnson who proclaimed it to be a hit, but said that they needed a “B” side. Dave said “give us a little while, we’ll come up with something”.

At that same time the company was listening to some potential new artists with the help of Burgess. One submission came from a man who went by the name of Little Joe Washington who hailed from Tijuana, Mexico. He was playing a really different mix of R & B and Latin music. Burgess liked the guitar riff and played for his group.

The sax player Danny Flores immediately added a melody with his horn. Dave liked it, but wanted to add just one thing. When it came to the break he wanted the group to pause and have Danny shout “Tequila”. Thus the song was born.

In those days when a group went into the studio they usually took three hours to do three or even four songs. When they booked the time at Gold Star Studios owned by Gene Autry, they had every intention of getting the two songs done. They did the song they thought would be the big hit, “Train to Nowhere”, first. They wanted it to be perfect and before they realized it there was only five minutes left of studio time. They quickly did “Tequila” in one take. There was even a mistake in it, but they didn’t care feeling that it was only a filler song for the “B” side of the 45.

Before they could release the song the group had to come up with a name. They wanted to call themselves the Champions in honor of Gene Autry’s horse, but at the time there was a very popular dance couple of Marge and Grover Champion and they didn’t want there to be any confusion. They decided it would be OK to shorten the Champion name to Champ and call themselves The Champs.

There was one other legal issue. Danny Torres was under contract to another record company. That problem was quickly solved when Danny used the name of Chuck Rio in the credits.

With everything in order, “Train to Nowhere” by the Champs was released in 1958. Dave and his Champs were very disappointed when the record got very little attention from the radio stations. Then a DJ in Cleveland named Bill Randle of WERE flipped the record over and started playing “Tequila”. The phones went crazy and it soon was the most played song on radio in the entire Cleveland market. That in turn led to the “B” side becoming one of the biggest hits of all time. It is still popular to this day - especially in bars.

As soon as the record started to climb the charts there was a new problem. Challenge Records got a phone call from the lawyers of the very well -known movie music writer Les Baxter. He was making the claim that he wrote the melody that Chuck Rio was given credit for was actually a song that was already written by Les Baxter. The song was called “De Rain” that was written for a movie called “Bop Girl Goes Calypso” and it was amazingly similar. Danny aka Chuck Rio had to admit that he did see the movie and without realizing it he subconsciously retained the melody.

It turned out that a similar melody was very popular in the bars of Mexico and that les Baxter may have actually picked up the melody himself on a visit. At any rate, they settled out of court and the song went on to sell millions of copies and is one of the most popular instruments of all time.

In my book CONFESSIONS OF A TEENAGE DISC JOCKEY I relate the story of my charity based birthday party. I collected “gifts” to give away to the needy and in return gave away some gifts to the listeners who made donations. The year was 1972 and the station was WIBG. As part of this on air T. Morgan Birthday Party, I had some guests stop by and I interviewed them on the air. Seals and Crofts were two of these guests. They told me a rather interesting story about their early days.

At the time one of the hottest songs was “Summer Breeze” by Seals & Croft. Long before their big hit, guitarist Jimmy Seals and fellow Texan drummer Darrell “Dash” Croft went to Los Angeles to make a career in music. At the same time Dave Burgess was looking for musicians to replace those who had made “Tequila” a huge hit. The original people didn’t want to tour and with a big hit, there was a real demand for The Champs to go on tour. Seals and Crofts were asked to join the band and were happy to do so.

That is, they were happy until they had to do an endless Rock ‘n’ Roll bus tour. In those days they packed a bunch of rockers into a bus. Unlike concerts today, the artists only performed their hit or hits and made way for the next group. The whole show could have many acts, but the concert itself was no longer than the average concert today with just one or two artists performing.

After many nights of just playing “Tequila” Seals & Crofts got very bored. In a conversation with some other fellow Texans Buddy Holly & The Crickets they learned that they also were tired of playing the same two or three songs every night. The musicians came up with a plan. Since most rock stars of the day didn’t have a huge press following with stories about them or photos of the groups, they thought that it would be fun to switch roles for a night or two to see if anyone would see the difference. So members of The Champs became Buddy Holly & The Crickets and Buddy and his group got a chance to rest their voices for a day or two. They knew each other’s music so well after hearing it every night that no one was the wiser.

The Champs eventually ran their course. Challenge Records did the same. Gene Autry got out of the record business and rode off into the sunset to bigger and better things. He made a fortune in real estate and bought the Los Angeles Angels.