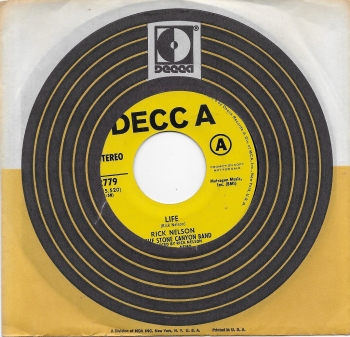 Anyone who was alive in the 50’s was very much aware of Ricky Nelson. His family had a TV show called “The Adventures of Ozzie & Harriet” that was extremely popular though most of the 50’s and well into the 60’s. In fact it lasted from 1952 until 1966 making it one of the most long lasting sitcoms in TV history. The show was as close to reality TV as you could get back then. There never seemed to be much of a plot to the show. The family just talked and talked and every once in a while they actually left the house to do something. One could only wonder what the father did for a living since they lived in a beautiful suburban home despite Ozzie being on the family couch for most the show.

The show was as close to their real lives as they could make it. Apparently older brother David was the main attraction in the early days for teen girls. He went on to be a minor movie star. The younger brother Ricky was cute enough, but suffered some health issues while growing up. The show didn’t really feature him much until he was a teenager. In fact when the Nelson family moved from North Jersey to Hollywood, Rocky was left behind with his grandmother.

Ozzie ran the show and the family with an iron hand. He decided to use the show as a platform for launching the career of the younger Nelson. It was Ozzie who got his son the first record contract and put together the members of his backup band. That wasn’t so odd. It was a musical family. Harriet was the singer in a band that was led by Ozzie.

Ricky started playing clarinet and drums at an early age. That all changed when he heard “Blue Suede Shoes” by Carl Perkins. He made up his mind that he wanted to be a “Rock-a-Billy” star and took up the guitar. It took him a while to master the guitar and in fact he played drums on his first recording.

The TV show could be credited with making the first Rock videos. Each week the script would somehow include Ricky getting a chance to sing. For many young teens (especially the girls) it became the main reason to watch the show.

In 1957 Ricky recorded his first record. It was a cover of the Fats Domino hit “I’m Walkin’’”. Despite the fact that the Domino version had been a top ten hit just weeks before the Nelson cover, it was a hit. It was quickly followed by a series of hits that year. They included seven top forty hits in the space of just seven months. Among those hits two made it to number 2 and two others to the top four on the charts.

Despite his huge success, Ricky wasn’t getting the money. His father kept him on a strict allowance of fifty dollars a week despite the fact that the young Nelson was pulling in $500,000 a year. As soon as Ricky was legally able he rebelled.

The first thing he did was get rid of the band that his father put in place. They were all good studio musicians but were much older than the star. In addition they really didn’t like playing Rock ‘n’ Roll. In addition he started to play more of the music that he really wanted to play. The end result was that from 1958 through 1964 Ricky Nelson twenty-five top forty hits. They included two that made it to number 1. He even out sold Elvis Presley during that time period.

Then came a dry spell. During most of the rest of the 60’s Ricky concentrated on making movies. He was a natural with his years of experience, popularity and good looks.

Around 1968 the itch to play music returned. He became Rick Nelson and put together a great backup band that became known as The Stone Canyon Band. The band included Randy Meisner who later teamed up with future members of The Eagles. They all were backing Linda Ronstadt.

It certainly could be argued that it was Rick Nelson was the spearhead of the so called California Country Rock sound that grew out of the state and became very popular in the 70’s with Jackson Browne, The Eagles, Linda Ronstadt, etc.

Like most pioneers in a new sound, Rick did not meet with much success. The closest thing to a hit he had was “Life” which while it got a lot of air play on the “adult Contemporary” radio stations, it didn’t even make the top 100 on the pop charts.

Then Rick and his Stone Canyon Band were invited to a huge Rock ‘n’ Roll revival in Madison Square Garden. At the concert Rick attempted to play his current music but was booed off the stage. All the audience wanted to hear was the hits from the 50’s and 60’s.

A stunned Nelson immediately wrote a song about his experience. It was called “Garden Party” and in 1972 it became one of the biggest hits of his career. The party, however, was once again over after that.

While Rick continued to record and tour, he never had another hit record. It during one of his tours in the 70’s that I met Rick Nelson. I spent some time talking to him back stage and was almost surprised by his personality was pretty much what you saw on TV and the movies. He was very open and friendly.

In December of 1985 the private plane carrying Rick and members of his band crashed in Texas while on a tour of the South. No one survived the crash.

The thing that seemed odd to me about it was why they were even flying in the plane to begin with. Rick dreaded flying and no doubt had it in the back of his mind how many musicians died in plane crashes. Yet, in 1985 he bought a used private jet. This jet had a history of mechanical problems. It had been owned by other musicians and they got rid of it because it was unreliable. It made no sense that the band was using it to tour given that history.

Rick Nelson left a legacy that is much more than just being a teen idol. Besides his pioneering work in Country Rock, he left behind his off springs, The Nelsons to carry on.

Tweet
Published in The Archives
More in this category: « Theremin — The Forgotten “Instrument” Non-Traditional Christmas Music »