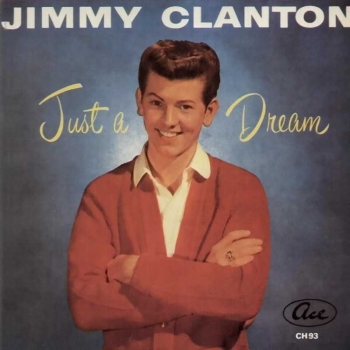 At first Jimmy had to take the back seat to the star of the Ace label Huey “Piano” Smith who was riding high with some hits in the 50’s. That changed when Clanton sat down in about twenty minutes wrote a song called “Just a Dream”. Overnight that first single made Jimmy the hottest act on Ace. It went to number 4 on the Billboard charts in 1958.

Unlike most of the other teen idols, Clanton wrote most his own songs. “Just a Dream” was just the start. Jimmy had hits with “A Letter to an Angel”. “A part of Me”, “My Own True Love”, “Go Johnny Go”, “Another Sleepless Night” and “Venus in Blue Jeans”.

The song “Go, Johnny Go” (not written by Jimmy) became the title tune for a forgettable movie put together by Alan Freed. He used many of the people in his famous Rock and Roll Caravan. Despite having stars like Chuck Berry, Eddie Cochran and Ritchie Valens the movie was a pretty typical poor story line that was really just a series of video performances by the artist. Since this was long before the age of videos, these appearances were for many the first time they were able to see these stars perform.

I had a chance to talk to Jimmy at a Philadelphia Broadcast Pioneers Rock and Roll lunch held on March 18, 2019 (click here for the story on this website). It was the second time that I talked to him, but this time we had a much longer conversation.

He told me what it was like to record for Ace Records. Ace was a legendary independent record company that had many hits in the fifties and early sixties. Almost all the artists were from the New Orleans area and they used the same musicians to record their records. The Clowns that backed up Huey Smith, also recorded for Frankie Ford (“Sea Cruise”) and Jimmy Clanton. Among those who did the backup work was a very young Dr. John. Jimmy knew him before he changed his name. Later Jimmy would add his voice to the Dr. John single “Because I Do”.

These area musicians became so close that later on some of them joined together along with Jimmy to form a group called The Rockets. By the mid- sixties Ace Records folded and Clanton became a disc jockey. He also appeared in some oldies shows that he put together. Old label mate Frankie Ford was also part of the show.

During our conversation it was clear that Jimmy was never a crazy rock star in his early days. He was always pretty straight laced and in the 80’s went a step further and (like Huey Smith) became very much involved in religion. He doesn’t take himself very seriously and jokes about his days as a teen star with the big hairdo. Unlike many his age, he still has a great head of hair that he attributes to his genes.

In recent years he came to fall in love with the Lancaster County Area of Pennsylvania. As he put it, the Amish country was a perfect fit for him. However, he doesn’t sit around and thinking of the past. His voice is still strong as evident at the PB lunch. You can see his performance by going to the Broadcast Pioneers button on this website. He left the lunch to do a show in Connecticut.

“Just a Dream” will always strike a chord for anyone who hears it. “It was just a dream, all our plans and all our schemes”. We have all been there.