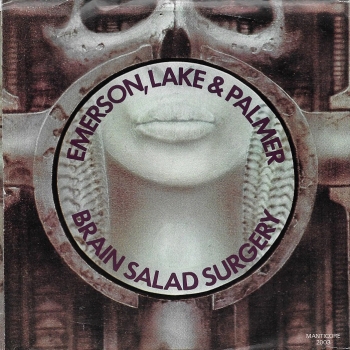 The classically oriented band really wasn’t built for singles. In fact they only had one 45 ever make it to the top 40. It was “From the Beginning” that hit the charts in October of 1972 and it was only on the charts for two weeks.

In 1973 they released the single pictured. There were two very strange things about it. The A side was “Brain Salad Surgery”. In fact there was no mention on the sleeve of the B side “Still You Turn Me On” which was a much better choice for a single. The other odd thing was that, despite it being the title of the album, the single was NOT even on the album. One would certainly think since it was called “Brain Salad Surgery" that it should be somewhere in the album of the same name! But it was not.

Not that it mattered. As mentioned, ELP was an album group. And they did sell lots of albums. In fact, they had eight gold albums to their credit before breaking up. Of those, the two biggest were TRIOLGY and BRAIN SALAD SURGERY. The albums often were hard to play on the radio because they were too long, but their exciting live shows prompted people to flock to the record stores to by the LPs.

Tweet
Published in The Archives
Tagged under
More in this category: « Al Stewart: The Forgotten Star Rock's Unsung Heroes Series: Willie Nile — The Can’t Miss Performer Who Is Still Trying »