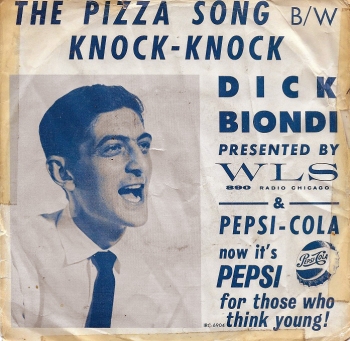 When Rock ‘N’ Roll was young it was often the DJs who created much of the excitement. Many of those radio pioneers became just as popular as the music itself. When I was very young I used to scan the AM radio dial looking for them at night.

AM was very different from FM. In the 50’s and early 60’s no one listened to FM. Despite often having to put up with static, AM radio was a great way to get an education. In my book, “Confessions of a Teenage Disc Jockey”, I go into great detail as to how this not only was a huge influence on me, but many rock musicians.

One such disc Jockey was Dick Biondi. He was one of the original fast talking screamers that seemingly never ran out of bad jokes. “The Wild eyed-tralian,” was just one of many names that he labeled himself with. As crazy and corny as he was there was something infectious about him. The music was wild and crazy and he did everything he could to keep the excitement level at an over the top pitch.

WBKW in Buffalo, NY was one of those radio stations that could be heard at night over several states. That was thanks to clear channels. If an AM station had a clear channel, it meant that no one else could use that position on the dial in the entire country. Add 50,000 watts of power to that and you can in theory be heard anywhere as long as the sunlight didn’t interfere.

Two of the most famous top forty DJs made a name for themselves at WKBW. One was Joey Reynolds (that is a separate story) and the other was Dick Biondi. Both went on to other stations but not before they made WKBW legendary.

Dick Biondi's departure from Buffalo is a legendary story in itself. Here is how Dick tells it:

I was doing my show and the owner of the station, he came into the studio, and he walked in, and he said what are you doing? You're the worst disc jockey I've ever heard. You don't follow rules. You don't play this. And I didn't know what to say. He said now I'm going downtown to see a movie at the Buffalo Theater, and you better shape up. He walked out, the record that was playing ended, and I got on, I said my boss just walked in and told me that I'm a terrible disc jockey, and he's driving down Main Street right now in a gray Chevrolet Impala convertible. So if you see it, throw a stone at him. And wouldn't you know it, some kid put the size of an orange stone right through the windshield, and the next morning I was gone.

As it turns out it was a blessing because loud mouth Biondi moved up the radio ladder. His new home became WLS in Chicago where he really made a name for himself. His style became so popular that there were as many requests for his silly bits as there were for the music he played. This led to the release of a single that had two of his worst. “The Pizza Song”, a song about what happened to his pizza was sung to the melody of the traditional folk song called “On Top of Old Smokey”. The opening line for “The Pizza Song” was “on top of a Pizza all covered in cheese” and it went downhill from there.

That was the “A” side. The “B” side was a series of horrible Knock, Knock jokes. You know the ones. "Knock, Knock" “Whose there?” “Cantaloupe” “Cantaloupe who?” “Can’t elope tonight my father has the car”. Hold your groans please. Yes, that is actually on this record. Listen if you dare.

If you do listen, you very well may wonder how this guy became such a sensation in Chicago and then Los Angeles. The answer probably falls into the category of you had to be there. Enough people loved him on the air that he was voted into the Radio Hall of Fame in 1998. Dick Biondi is still on the air part-time on WLS-FM in Chicago despite turning 84 on September 13th.