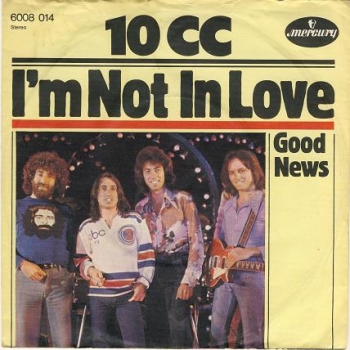 The group thought that their style was perfect for The Beatles' Apple Records and were very disappointed when they were rejected by the label. They went next to the only person they knew who might think that their clever songs that were full of social statements and parodies. Jonathon King, who was a DJ that had his own record company called UK, loved what he heard and signed the band to his label.

During their stay with the label the band had some hits in England. That led to a US Record company showing enough interest to sign the band for 1 million dollars.

10cc was launched in the US by Mercury Records with some fanfare. The critics and radio DJs loved them. The audience wasn’t quite as enthusiastic. The clever lyrics and sometimes odd sense of humor often went over the head of the listeners. Some were won over by the great harmonies and production but it took a couple of albums for the group to catch on with a big hit single. In 1975 “I’m Not in Love”, written for the most part by Eric Stewart, finally made the grade. The song featured a haunting sound with lyrics about a man insisting that despite all the signs, he was not in love. The single made all the way up to number 2 on the singles charts.

That same year 10cc also released “Art for Art’s Sake” a parody on creating art to make money. The 45 was very well done, but didn’t even make the charts at all as a single. It would be two more years before 10cc would have another hit called "The Things We do for Love". It was their biggest selling single and their last big hit.

The friction over what direction the band should take took its toll and in 1976 Godly and Crème left the band to start their own project. That project never had more than very limited success.

Then in 1979 Eric Stewart was seriously hurt in an auto accident and was unable to perform. Graham tried to carry on, but finally disbanded 10cc in 1983. Eric did recover enough to team up with Paul McCartney for a few years. Then in 1991 the original members reunited for a four year run. Then again in 1999 Graham put together another 10cc (without the others) and is still performing on, off and on again with them.