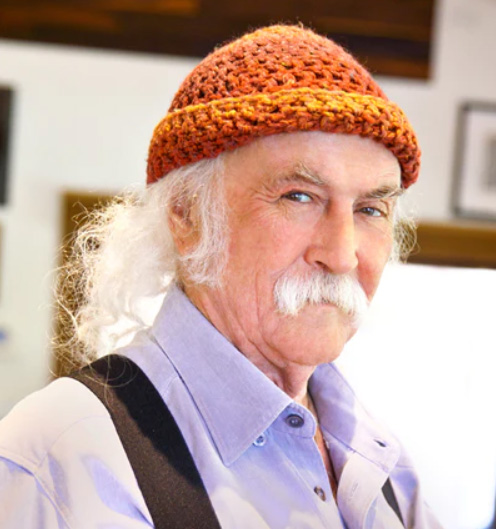 The changes in both Folk and Rock music in the 60’s was in large part due to David Crosby’s talents. This two-time Rock & Roll Hall of Famer was uncanny in his ability to bring out the best in whomever he sang with his ability to harmonize.

It all began with the group who were the real pioneers in what was labeled “Folk Rock” in the mid 60’s. The Byrds sounded like nothing else that anyone had ever heard. Their interpretations of Bob Dylan’s music started a whole revolution in music.

After leaving The Byrds, David was a founding member of one the most popular groups of the 70’s. It has been said that the genesis of David leaving The Byrds was his filling in for Neil Young on stage when The Buffalo Springfield performed at the Monterey Pop Festival in 1967.

After forming a new their new group, Neil Young would on occasion, be part of Crosby, Stills and Nash. Again, it was those beautiful harmonies that made them really stand out. It wasn’t just his voice, but his guitar tunings that influenced so many other acts in both Rock and Country music.

The life of David Crosby was not as mellow as the songs he sang and co-wrote. His reputation for being “difficult” was well known. Much of this was brought on by his addictions. These addictions caused him to not only lose his freedom (spend time in jail), but nearly his life. Being arrested my not have only saved his life but changed his view of life.

A more somber life and transplants enabled Crosby to have a longer and more complete life. In making the announcement, David’s wife of 35 years Jan Dance, made this statement.

“Although he is no longer here with us, his humanity and kind soul will continue to guide and inspire us.” said of her husband, “His legacy will continue to live on through his legendary music. Peace, love, and harmony to all who knew David and those he touched. We will miss him dearly.”

Among the praise and condolences that are being posted, one of the most significant is that of his band mate Graham Nash. The two not only played together with CSN & Y, but also performed as a duo at times.

“It is with profound sadness that I have learned that my friend David Crosby has passed”, said Nash, “ I know people tend to focus on how volatile our relationship has been at times, but what has always mattered to David and me more than anything was the pure joy of the music we created together, the sound we discovered with one another, and the deep friendship we shared over these many long years. David was fearless in life and in music. He leaves behind a tremendous void as far as sheer personality and talent in this world. He spoke his mind, his heart and his passion through his beautiful music and leaves an incredible legacy. These are the things that matter most.”

While Crosby had apparently been ill for some time, his death was still a surprise. As late as yesterday he was posting on twitter with his reaction to someone claiming that people with tattoos will not go to heaven. His response was typical.

“I heard the place is overrated, cloudy”.

In 1971 David Crosby released a solo album entitled IF ONLY I COULD REMEMBER MY NAME. His name will surely not be forgotten.

Tweet
Published in The Archives
More in this category: « A guitar legend life has been claimed by bacterial meningitis