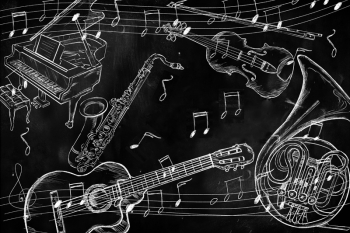 Early rock and roll was the major factor. The music of the 50’s drew the first line on what was hip and what was not hip to a classic rocker.  Buddy Holly, Carl Perkins, Jerry Lee Lewis, Chuck Berry, Gene Vincent, Eddie Cochran, Little Richard, Elvis Presley (in his early stages), and The Everly Brothers are some of the “cool” rockers of the 50’s.  Frankie Avalon, Bobby Rydell, Pat Boone, Fabian, Bobby Darin and Paul Anka were not “cool”.   Pop music in any form was not.

The music scene changed in the early 60’s when Eddie Cochran died in an auto accident, Gene Vincent was seriously hurt in the same accident, Elvis went in the army, Chuck Berry got in trouble with the law, Jerry Lee Lewis married his much younger cousin, Little Richard stopped playing rock and became the Reverend Richard and the biggest blow of all, Buddy Holly died in a plane crash.

The void was filled with a new R & B hybrid called Motown. That music featured the influence of mixing gospel and blues to form a new pop genre very much slicker than the R & B of the 50’s. It appeared as though the “real” rock was dead.

Then came the British Invasion led by The Beatles and The Rolling Stones.  Despite the fact that these groups were in many cases simply doing cover songs of the R & B, Blues and rock songs of the 50’s, they took the US by storm.  The music became much more original when Bob Dylan made the controversial move from folk to electric rock.  His success encouraged more artists to push rock in a more complex form with more meaningful lyrics.

By the mid 60’s it wasn’t just the British bands that were capturing the music scene.  Like weeds in the summer, groups from all over the United States started to spring up.  By the Summer of 1967 thanks to acts like Jimi Hendrix, The Jefferson Airplane, The Doors, The Grateful Dead, The Mothers of Invention, Cream, and The Byrds the world was ready for a new kind of rock.

That led the way for radio to change as well.  Here in Philadelphia the first station to start playing the new music was WIFI during that Summer of ‘67.  BY 1969 the huge crowd at Woodstock showed that this new rock was now the dominant music.  Album or progressive radio started to successfully compete or even beat out top 40 stations in the ratings.

Like in the 50’s, the music that was considered hip by the progressive rock stations and thereby allowed to be played was a major issue.  To the casual listener to radio, this might have been confusing. For example, for progressive radio to play “Twist and Shout” by the original artists The Isley Brothers was not hip.  However, you could play the same song remade by The Beatles and that was OK.  The same was true for the Motown covers done by the Stones. Even though many “hip” artists loved the R & B and Motown artists, it was taboo for progressive stations to play the original artists.  It was a question of style.  The “hip” groups could play the songs if they did it in a more “rock” style.

Soon the more progressive groups started to get more and more air play.  Groups like Yes, The Electric Light Orchestra, Genesis, Emerson, Lake & Palmer, Kansas, etc leaned more on a progressive form of classical and Jazz.  That led to the success of Jazz-Rock fusion bands Like Weather Report, Return to Forever and The Jeff Beck Group.

This music has met the test of time and today one of the most popular stations in Philadelphia is Classic Rock WMGK.  It continues to attract audiences of all ages.

Tweet
Published in The Archives
More in this category: « 50's Rock and Roll — The Roots of Classic Rock Rock Quiz! »