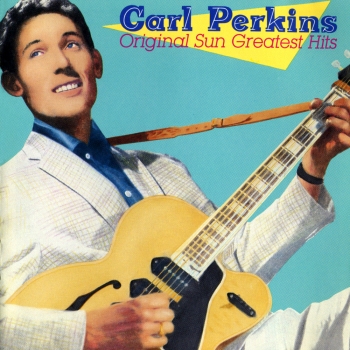 You can’t imagine how surprised I was that day. While walking home from school I saw a man coming up Vine Street towards Washington Avenue that I recognized right away. Since I was going in the opposite direction, Carl Perkins was walking right past me. He was the very first rock star that I ever saw. I let him pass without saying a word. I had no idea what he was doing walking the streets of Scranton, PA.

Since it was a hit before I was aware of Rock ‘n’ Roll I didn’t know his story. In my article on Sam Phillips I related how Carl got his first record contract with Sun Records. Once he did, Carl was sent out on tour with some of the other Sun Record artists at the time. They must have been something to see — Elvis Presley, Johnny Cash and Carl Perkins — all on one show.

After one of these shows Carl was complaining to his friend Johnny Cash that he couldn’t come up with the right hook for a hit song. Johnny suggested that he write about something that was the popular fad at the time: shoes. Carl laughed and said he knew nothing about shoes.

Then not long after Perkins was playing at a club where the crowd was really rocking to his music and dancing up a storm, Carl noticed one guy in particular that seemed extremely proud of his blue suede shoes. During a break he spied that same guy almost getting into a fight when another guy accidently stepped on his shoes. He shouted out him “don’t step on my suedes!” Wow, so much passion over a pair of shoes!

After the show Carl went home, but he couldn’t sleep. All he could think of was what Johnny Cash said to him. He took his electric guitar and without plugging it in so he didn’t wake up his wife and kids, he started to write. He didn’t have any paper to write down the words so he emptied a paper bag of potatoes on the kitchen table and used it. By the time is family was awake the legendary song was all done. His wife loved it. So did his brothers who were members of his band.

Sam Phillips, however, was in no real hurry to record the song because he was so busy with some of his others artists. That changed when Carl Perkins and the Perkins Brothers stole the show from Sam’s prime artist Elvis Presley two nights in a row with screaming standing ovations for “Blue Suede Shoes”. Elvis never worked with Carl again and Sam put a on rush recording the song. They did three takes and released the second one.

At the time of the release of the 45, Sam tried to cover his bets by releasing “Blue Suede Shoes” to pop stations and “Tennessee” (a country tune) to the country stations. Carl couldn’t wait to hear his record so he ran to his local record store. The store did have the record in stock, but Carl was too poor to buy a record player to play it at home, so he asked the clerk to play it for him. The clerk pulled out the 45 and Carl was puzzled. He said no my record is a big one with a little hole in it (referring to a 78 RPM record). Carl had never seen a 45 and thought he was being short changed somehow. The clerk was able to convince him that the 45 was the wave of the future because the jukebox dealers loved how durable they were.

While the song became one of the best known songs of all time, it turned out to be a double edged sword. In order to expose the song as much as possible The Perkins Brothers went on their first real long tour. Sam Phillips rented a limo to take the band from city to city. The whirlwind tour was taking its toll on the brothers, but Sam wanted them to go to New York after their gig in Norfolk. He had booked them on one of the hottest national TV shows at the time — “The Perry Como Show”. This was a huge break so it was a must that they go to the big city. The catch was that they had to be there the very next day.

That meant that the limo had to drive all night in order to make it to the show on time. It was a long night because the promoter wanted Carl to see a Norfolk native perform and give his opinion on this young artist. Carl was very impressed and predicted that his kid Gene Craddock would be a star. Perkins was right. After Craddock changed his name to Gene Vincent he scored a hit record “Be-Bop-a-Lula” that was almost as big as “Blue Suede Shoes”.

After the long night the group squeezed into the limo and headed north. They got as far as Dover, Delaware. Just as the sun was coming up, the limo driver fell asleep and rear-ended a big truck. The out of control limo rolled over four times smashed through a guard rail and ended up in a creek. The driver was killed immediately. The drummer, Fluke Holland, was the first to wake up and he pulled the knocked Carl out of the creek just before he drowned. Jay Perkins suffered a broken neck and severe internal injuries from which he never recovered.

The accident completely devastated Carl. He blamed himself and his driving ambition for the accident. The bottle then became his best friend. Despite his big hit, with him being so drunk all the time, his career started to fall apart. Even getting a record contract with Columbia Records didn’t help. When Columbia dropped him, he was down and almost out.

That was the reason Carl Perkins was walking the streets of Scranton. The best he could do at this point in his career was to play small local bars like the one he was playing that night.

Then two things happened that brought him around. The first was old friend Johnny Cash offering to help. Johnny had his own demons that he conquered and was the perfect man for the job of getting Carl sober.

The second was The Beatles recording his songs. In total they did six songs: “Everybody’s Trying to be My Baby”, “Honey Don’t”, “Matchbox”, “Sure to Fall in Love”, “Glad All Over” and “Lend Me Your Comb”. They even invited Carl to sit in on one of their recording sessions. Many people give Buddy Holly credit for influencing The Beatles, but they recorded more of Carl’s tunes than Buddy’s. Paul McCartney was quoted saying “if there was no Carl Perkins, there would be no Beatles”.

Just before Carl died, a bunch of Rockers got together for a huge concert to pay tribute to him. Realizing that he was able to influence a whole generation of Rock stars, he broke down and cried at the concert. Later Carl was quoted as saying that the concert was one of the happiest days of his life. Valda (is wife from 1953 until his death) said that he could now go to his grave in peace. He died on January 18, 1998 at age 65.

During the early days of Sun Records Elvis Presley had the sex appeal, Roy Orbison had the voice, Johnny Cash had the unique Country sound, Jerry Lee Lewis had the crazy stage show, but it was Carl Perkins that made Rockabilly a national craze. He was the King of Rockabilly.

Embed from Getty Images
Tweet
Published in The Archives
More in this category: « Mitch Schecter — From the Streets of Philly to the Beach with The Rip Chords Featured 45: Before They Make Me Run — The Rolling Stones »