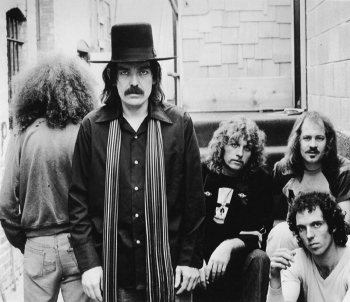 During my interview with him he came up with the most interesting view points on life and music. You never knew what his answer would be to even the simplest questions. One thing that always spiced up the conversation was his wild, off the wall sense of humor.  Often you would be laughing so hard that you had trouble going to the next question.

The second time I talked to Don I had met him at the airport and then took him to his hotel room. I asked him how his trip went and he replied “The food was so bad that I almost kicked over my high chair, the water even tasted like fish fins”.

Later that night in his dressing room after his concert at the Spectrum , he was approached by Ken Kweder.  The local musician was in awe of Captain Beefheart and his Magic Band and was very excited to meet him.  Ken was gushing all over when he asked Beefheart “Where do you get the ideas for those incredible complex arrangements in your music?”  In a blink of an eye Don answered “ I do lots of Coke. I drink lots of Coca Cola.”

The lyrics in his songs are a cross section of these kinds of play on words and imaginative views of the world.  A world that he called “God’s Golf Ball” While playing with words he often had a point to make.  In the song “Mirror Man” he would repeat Mirror Man until it became mere man.  A reminder to us all, that we are all simply mere men.  A mirror played a similar role in the song “She is too much for my Mirror or anyone else’s”   That appeared on the album that was selected by Rolling Stone Magazine as the best album of the decade as did “When Big Joan sets up”. In that song he laments that Big Joan is out of reach because her hands are too small.  One of my own favorites is “I Love You, You Big Dummy, quit asking Why”  Some of his songs have crazy titles like “My Human gets Me Blue”, “I Wanna Find a Woman Who Will Hold My Big Toe Until I have to go”, “I’m Gonna  Booglarize You Baby”, “Alice in Blunderland”, “Lick My Decals off, Baby”, “The Past Sure is Tense”, “Ash tray Heart” and “Nowadays a Woman has to Hit a Man”.  Most of his songs force you think a little before fully understanding them.

Yet, when asked to give his word of wisdom to everyone, he said “I don’t think there is one”.  Despite his somewhat modest statement, there is an entire website devoted to quotes and lyrics from Van Vielt.   One of my favorites is “Paranoia makes for a good propeller” His philosophy on life was very simple. The world is one.  We must respect each other and mother nature or we are doomed. Beware of controllers like the government and the church.  People are born knowing, they become confused by their controllers.  Everyone is designed to do something and if they don’t do it, they have no chance at being happy. He described himself as a square peg that his whole life people were trying to fit in a circle. It just doesn’t fit no matter how hard you try.

His music certainly was hard to classify. In his early days he was like the new Muddy Waters.  He could have easily become the best blues singer ever.  Instead, he had a different sound in his head that was very much like his paintings.  Both could be seemly out of control, but he always had a master plan.  His combination of blues, Jazz and rock didn’t work for many listeners.  To paraphrase Zappa, most people when first hearing Beefheart would cringe and reach for a Doors record.

Some critics of Beefheart say that the Magic Band deserves more credit for the music than Beefheart.  There’s some truth to that.  Since Don didn’t know how to read or write music, he had to find a way to get the band to perform the complex ideas in his head. He knew what he wanted and there was no compromise in that regard. Former Magic Band member Ry Cooder called Beefheart a “Musical Nazi”.  The Captain drove his troops 12-16 hours a day in practice sessions. This enabled the original members to become one of the tightest and well versed musicians in all of rock.  Much to their credit, they stick it out for a long time without much success in selling records or touring.

If you have any doubt that the band wasn’t the reason that the music so incredible, just talk to John French.   ‘Drumbo” as he was dubbed by Beefheart, was 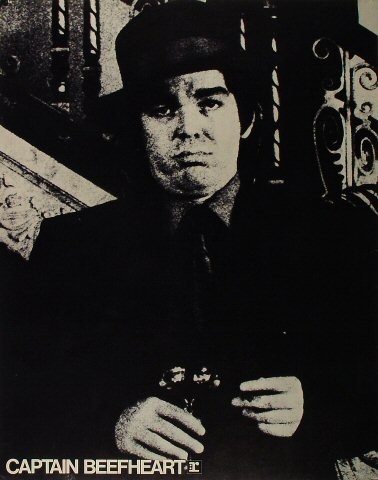 the force behind Don’s music. Since Don didn’t know how to express his ideas in any meaningful way that the band members could understand, it was up to John to create a system that the band could follow. After Beefheart did his best to bang out parts for the band on the piano or guitar, Drumbo would translate that in to music that the band could read.  It wasn’t easy work. It went against so many rules of the ordinary rock band.  Often there was conflicting rhythms and band members had to memorize their parts and ignore what the rest of the band was doing.  Often, for example, the bass player would be playing a different rhythm than the drummer. In most cases, they cue off each.  This was not the case in many of the Magic Band arrangements.  It created some of the most unique and complicated beats ever done in rock music.

There are those that would claim that the music was so complex that the band could never repeat the performances that were done on records. Frank Zappa was a perfectionist in the recording studio.  He was never satisfied with one take of any song no matter how good it sounded.  When he asked the Magic Band to do a second take on any song while recording TROUT MASK REPLICA, he was totally amazed that the band did the songs exactly the same every time.

While John French deserves create for much of the success in making the music happen, he will be the first to tell you that Beefheart was a genius.  None of what John did could have been done without the vision of Captain Beefheart.

While Beefheart never got his just due, he did influence a whole generation of rock stars. Joe Strummer of The Clash said that when he was 16 years old the only record he listened to for a year was TROUT MASK REPLICA.  The Clash was only one of many punk artists that were inspired by Beefheart.   Devo’s favorite artist was Don.  You can hear the influence in Tom Waits, P J Harvey (who learned how to play by listening to Beefheart records), Nick Cave, The White Stripes, Public Image LTD, Pere Ubu, and many others were able to craft their art thanks to Beefheart leading the way. There were even several groups that tried to follow in his footsteps using names of his songs as the name for their bands. In Philadelphia the group Good God took their name from a recommendation given to them by Don.  There have a few tribute CDs made of his music-including one done in 2005 here in Philadelphia. It was called MAMA KANGAROUS WOMEN OF PHILADELPHIA SING CAPTAIN BEEFHEART.  The album featured twenty female bands from Philly.

Sadly, Multiple sclerosis forced Don to stop performing in 1982. The world of music lost one of its most creative and original characters.  He was able to still do some painting until his death on December 17, 2010.

Tweet
Published in The Archives
More in this category: « Big Star Who the Hell is D.L. Byron? »