Buddy Guy — The Blues is Alive and Well 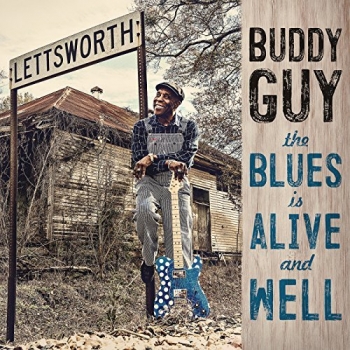 The title of Buddy Guy’s latest album, THE BLUES IS ALIVE AND WELL, has more than a ring of truth to it. A lyric in the title song “as long as I’m around, the Blues is still alive and well” may even sound arrogant to some casual music fans, but those who really know the Blues know exactly what he means.

Buddy Guy is the last great Chicago Blues man standing. Muddy Waters, Otis Rush, Howlin’ Wolf, Magic Sam, Junior Wells, Little Walter, and Sonny Boy Williams are all long gone. He is the man who is carrying the torch for the genre and carrying it well.

The new album is available in CD, vinyl (including a special blue vinyl set that includes an MP3 code) and as a download. It’s all good.

Chicago Blues, which started to find a receptive audience in the Southside of Chicago in the early 50’s, was Country Blues gone electric. Country Blues was born the deep Southern States of Louisiana and Mississippi. Having been born and raised in Lettsworth, LA (see album cover) Buddy was exposed to the acoustic guitar sound of the Blues and fell in love with it. As a child George “Buddy” Guy loved the guitar so much that he made his own two string guitar that was known as a diddley bow.

An interview with the Blues master is always a treat. He is a joy to talk to and is full of great stories. The most hair raising one is of the tour he did with the guitar giants Eric Clapton and Stevie Ray Vaughan.

The last stop on the tour was in a small town in Wisconsin. That was just a short helicopter ride from Chicago so Buddy invited the entourage to fly into his home town. The plan was to have breakfast at Buddy’s place the next day where he planned a special down home spread.

Buddy was in the first of two helicopters that took off at 12:40 AM August 27, 1990. He said when his flight took off, the fog was so thick that you couldn’t see anything. Despite this, Guy figured the pilot must know what he is doing and he just sat back relaxed. His chopper landed safely and Buddy went right to bed.

The next morning he got up to make breakfast for everyone. Before he could finish, he got the news that the second chopper went down and Stevie Ray was killed.

Buddy also told me that he was playing in a band in his early teens. The band played in bars and he was very much under age. In order to even get into the bar he wore a fake facial hair. The band didn’t afford Guy a decent living so he also worked as a janitor at LSU in Baton Rouge.

In 1957 he made the same move that so many other southern workers who had trouble making a living in the South did. They went up the Mississippi River and ended up in Memphis or went all the way to Chicago. Buddy chose to go the full route and it made history.

In Chicago his work on guitar caught the eye of an established Blues great, Muddy Waters. Buddy was playing at a club and did his guitar solo while running up and down the 100 foot bar. Under the legendary Waters, Buddy fully developed his exciting flashy style. Despite playing with many of the Chicago giants in studio sessions, Chess Records owner, Leonard Chess, didn’t want to record Buddy because he thought his guitar work was a bunch of noise. This forced Guy to team up with his longtime partner Junior Wells. The two did not record for Chess, but still made a mark on the Chicago music scene and recorded for a lesser known local label.

That partnership was still going strong in 1967 when I first saw them play in Philadelphia. At that time the Buddy Guy guitar work was still somewhat subdued compared to his later work. It was a different Buddy Guy after he started his own band and played at the Main Point a few years later.

Now he was the show. Buddy played behind his back, with his teeth and while rolling through the audience. It was a very lively show.

The last time I saw him a couple years ago, he still did an exciting performance. Even at the sold out show stately Kimmel Center in Philadelphia he strolled through the crowd - even in the balcony.

Despite his age (born July 30, 1936) Buddy Guy still has it. He is currently touring, has his own club (Legends) in Chicago and now has a solid new album.

There’s nothing novel about THE BLUES IS ALIVE AND WELL. Wisely Buddy has chosen not to try and reinvent the wheel. The Buddy Guy explosive guitar style was a major bridge between Blues and Rock. He still is one of the fastest and most exciting guitarist alive. Years ago Eric Clapton called Buddy Guy “the best guitarist alive” and Buddy hasn’t missed a step. While this latest effort is not quite up to his first commercial breakthrough, LP DAMN RIGHT I GOT THE BLUES in 1991, it is still a good representation of his skills.

“Guilty as Charged”, “Bad Day”, “You did the Crime (and I’m doing the time)”, “Nine Below Zero” all stand out. He still has his sense of humor. In “Nine Below Zero” he cries the blues because his woman waited until it was nine below zero in Chicago to put him out.

Listening to the album you can easily see how Buddy Guy influenced so many rockers like Jimi Hendrix, Jimmy Page, Stevie Ray Vaughn and Jeff Beck. In fact, Keith Richards, Jeff Beck and Mick Jagger all make guest appearances to pay their respects to the man with lightening fingers.

Still there’s an undertow of sadness about the record. In songs like “A Few Good Years” (where he asks God to give him a few more good years). “Blues no More” (he will be singing the Blues until he sees the pearly gates), and “End of Line” (I still can get this damn job done, but I feel sometimes that I done end the line). Let’s hope that the end is still a long way off for this talented, but modest man.

Tweet
Published in News & Events
More in this category: « Broadcast Pioneers of Philadelphia Presents a Tribute to WMMR Phil Collins — Not Dead Yet »